Himself is doing that thing he often does where he's progressing multiple projects at the same time.

As well as preparing 143 for painting and assembling the body of bowsider 20, he's also got around to cutting and bending the brass roofs for a couple of superbarns I built last year. 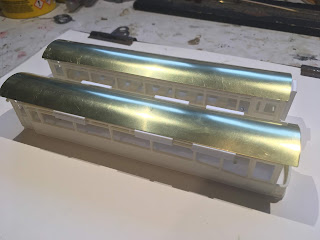 Nearest the camera is the latest observation car, 152, which is quite a complex job.

As well as making the sure the front edge of the roof followings the curvy profile of the carriage body he's also going to solder in the two window pillars made from brass, create a lip along the underside which will keep the top rail of the sides nice and straight and also add some depth to the underside to represent the ornate ceiling on these latest luxury carriages.

The one behind is rather more straightforward.

It's 120, the latest of the second series of third class saloons.

Most of the other details have been completed on this carriage, such as the interior and under floor detail.

Once the roof is fixed in place he'll be adding the finishing touches like the vac pipes and the handrails either side of the entrance doors before moving on to paint it.

152 will be heading back in my direction for the fitting of its exceptionally posh interior, the parts of which are already cast in resin.