'Bron Hebog' is a successor to the acclaimed OO9 exhibition layout 'Dduallt'.

It is a model of Beddgelert station on the rebuilt Welsh Highland Railway depicted around 2009 / 2010 when the railway was re-opened from Rhyd Ddu through Beddgelert and through the Aberglaslyn Pass to the south. 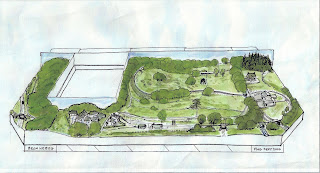 It is more than just a model of Beddgelert Station and encompasses the first of the famous 1 in 40 'S' bends climbing away to the north into Beddgelert Forrest, and to the south the layout also features Goat Tunnel and the notorious 'bridge to nowhere', a relic of the ill-fated Porthmadog, Beddgelert and South Snowdown Railway.

So to call the layout just Beddgelert would not do the scale of the project justice. Neither would it be especially original.

Instead we settled upon 'Bron Hebog' which is the name of the wider area to the west of the village beneath the mountain Moel Hebog.

The finished layout is huge, by OO9 standards, with the trains truly running through the landscape.

The station itself with its passing loop is being built to scale and the platform can accommodate an authentic length rake of 12 carriages behind one of the monster NGG16's.

As you can read on this blog the work on the layout, and the rolling stock, is progressing steadily although there has been no deadline set for completion.

Exhibition managers who would like to express an interest in having 'Bron Hebog' appear at their show can email: bronhebog(at)btinternet(dot)com