Four Wheels On My Wagon 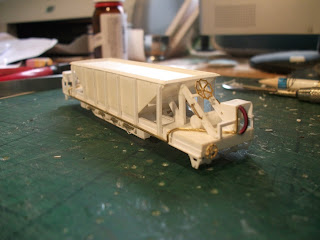 My WHR ballast wagons are just about ready for some attention from the airbrush.

I'm really pleased with the large handwheels which were etched for me by Allen Doherty.

Given that I had no proper drawings to work from, only measurements I took myself (during a dawn raid at Rhyd Ddu when there was no one about) I'm delighted with how these wagons have turned out. I think they've defenitely got the look and feel of the real things.
Posted by Rob Waller at 17:05 No comments:

Some shots of 87 in the process of receiving its photographic grey livery. 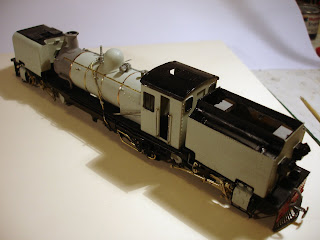 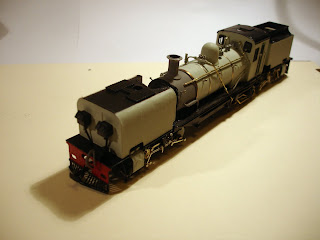 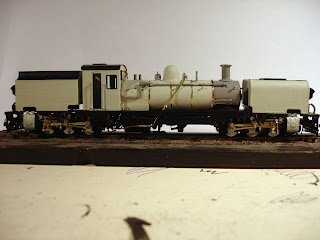 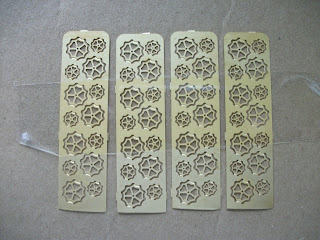 The etched hand wheels have arrived so I can now complete the ballast wagons.

There are two on each wagon. The larger ones operate the hopper door mechanism, and there is one of the smaller type operating the hand brakes at each end of the wagon.

(I also need 2 brake wheels for each DZ wagon - you can follow progress of them on the other blog. Link on the right)

I like to challenge myself to make as much of my models myself from scratch but there are times when you have to admit defeat - so thanks to Allen Doherty of Worsely Works for designing and producing these for me.
Posted by Rob Waller at 19:24 No comments:

On the other side...

For anyone following progress on the DZ wagon project there's a new entry on my other blog - click on the Boston Largs Works logo on the right.
Posted by Rob Waller at 15:46 No comments:

Let's do the Time Warp

Soon enough everyone modelling a contemporary railway scene comes across the same problem: that while their layout is a frozen in time the actual place they are portraying is constantly changing.

This is a dilemma the Bron Hebog team have been chewing over for a few months now since our last visits to the real Beddgelert.

Difficulties with positioning disabled access ramps to carriages have led to the decision to do away with the flower beds on the platform. (It was also proving impossible to protect the plants from the local sheep).

So what were we do to with the same flower beds on the under-construction Bron Hebog? Rip them out or let them stay?

There have been bigger changes in the landscape surrounding the railway. A new corrugated metal barn has appeared at Cwm Cloch Farm this season, and the existing one (which I had so carefully modelled) has been extended. 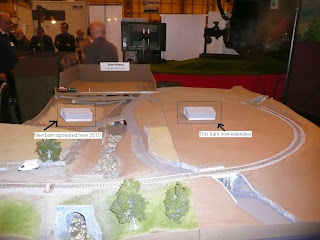 Plan A had been to respond the the changes and build a new barn and alter the existing one. That's all very well, but realistically we're probably still a couple of years away from 'finishing' Bron Hebog (whatever finishing a model railway really means?) and who knows what other changes there will be in that time. If we try to keep up now isn't there a risk we'll end up chasing our tails?

So it's been decided to do what we did with Dduallt. The layout will be built as Beddgelert looked in 2009. However we won't be including the locos and stock in this time warp. That's how we end up with Single Fairlies, Darjeeling B class tanks and Super Barns on a Dduallt which is frozen in 1988 with passing loop and signal box etc.

A sensible compromise or a mish-mash? Do let me know what you think.
Posted by Rob Waller at 16:11 7 comments: 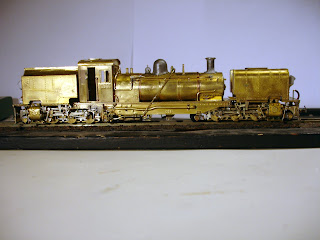 Pictures just received from the Oxfordshire end of the operation of the new NGG16 number 87.

It's ready for attention from the airbrush and will be turned out in the photographic grey livery in which it ran its first season on the WHR last year.

There have been many subtle alterations made to the Backwoods kit to represent this earlier, Belgian-built, example of the breed. They include removing a window from the rear side panels of the cab and some changes on the front of the front water tank. 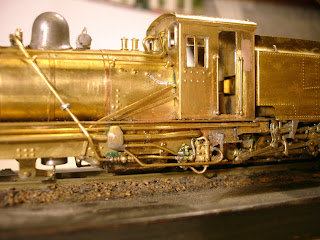 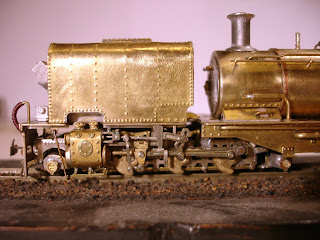 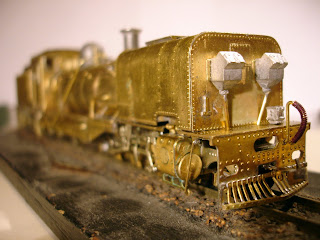 While I wait for the etched brass wheels to finish off the ballast wagons I thought you might to read a little about what else is going on and future plans.

Well, I'm working flat out on some DZ wagons for a client. To check out progress take a look at my Boston Largs Works blog. (Link on the right hand side of the page)

Down south, the other half of the team is busy on a second NGG16. The Backwoods kit is being adapted to represent number 87 and it's intended to turn it out in the works grey which the loco ran with in 2009.

I'm also hoping he'll find time soon to knock up a brass roof for the KMX tamper so I can make more progress on that. Here's a shot of it taken on the layout at Warley last year. 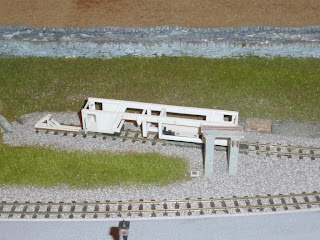 On the layout more work is planned on the 'bridge to nowhere' - the arched bridge over the Beddgelert to Tremadog road built for the planned PB&SSR. The stone detail's now being added to the wooden base structure which was knocked up for the Warley appearance. 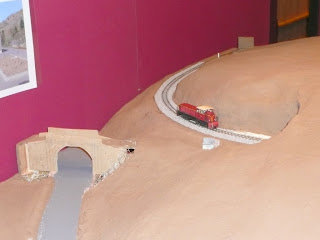 Our artistic director Francis is also going to be busy drawing up plans for me to make models of the farmhouse at Cwm Cloch and the Oberon Wood housing development at the south end of the station.
Posted by Rob Waller at 11:14 1 comment: 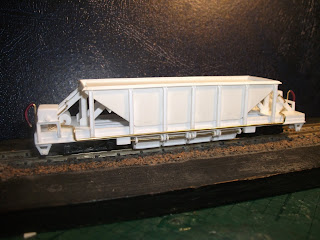 My own ballast wagons, for Bron Hebog, are nearing completion.

All that remains now is to fit the brass hand wheels which are being etched for me by Worsley Works, and also some brass steps will need bending for each corner.

Then they'll be sent down south for painting by the team who have been practising weathering techniques on standard gauge 4mm stock recently, so I'm expecting great things of them on these honest workhorses of the WHR.
Posted by Rob Waller at 20:11 2 comments: