I decided to do something which was long overdue yesterday, and tidy up my modelling area. 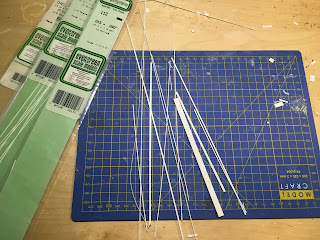 It was the perfect time to do it, having finished my work on number 20 and handed it over to Himself, and the place was becoming a bit of a disgrace.

Although I try to be quite disciplined about putting materials back when I've finished with them, it seems inevitable that over a period of months I build up a collection of stray plastic strips scattered all over the desk.

The simplest thing would be to gather them up and put them in the bin with all the other offcuts and chaff, but, as I posted here a while ago, I'm acutely aware that this stuff is getting a lot more expensive than it used to be.

As a result, the miser in me (which is never far from the surface) decided it was a worthwhile investment of my time to go through them all, work out their size, and sort them back into the vast collection of packets.

I am now bathing in the warm glow of both tidiness and thrift.
Posted by Rob Waller at 08:00 2 comments:

This week saw me finish work on the interior of bowsider 20. 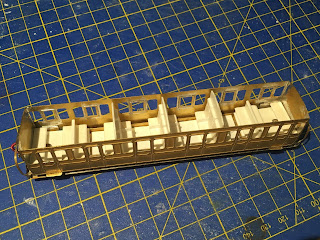 These are quite complicated to make, especially the ones with two first class compartments, but it’s helped by being easy to break it down into bite-sized bits sections.

I’ve handed it over to Himself to paint it in the woefully dull Col. Stephens colour scheme....
Posted by Rob Waller at 10:08 No comments:

The mystery chassis for Gelert has been test fitted into the Robex body. 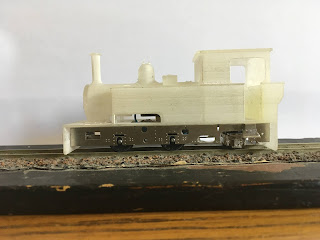 At this stage it doesn’t have the fly cranks - which have to be fabricated as a four slice sandwich of brass etches! - nor has the motor been wired up yet, so it hadn’t gone for a test run. 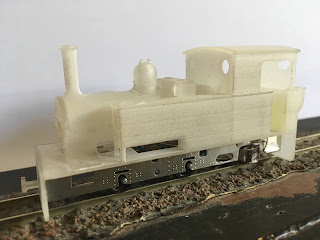 Himself is relieved, though, that he many to remove the false frames from the body without managing to break anything off, which is a step in the right direction after putting his finger clean through the body of the last 3D printed loco he built.
Posted by Rob Waller at 09:00 No comments:

Our Mountaineer has been ailing for some time - although at least, unlike the real one, it was still in service. 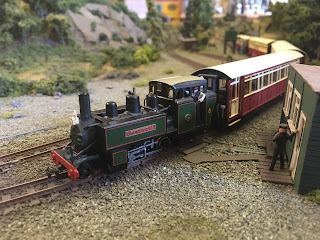 Its progress was very erratic, both in starting and when on the run, until finally it expired in a cloud of smelly smoke.

The problem clearly lay with the motor, but Himself was reluctant to break up the spare Arnold chassis we have in stock for a motor transplant.

Instead he was even more ambitious and found a way to extract the the commutator from another, even older, chassis and install it into the motor housing of the one under our operational Alco.

We gave it a test at the weekend and it performs very well now. 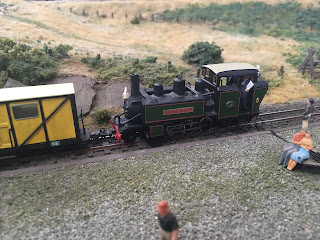 It does still irk me that it's the only locomotive we have left in our fleet with an inaccurate chassis, and I retain an ambition to get him to have a go at fitting a Farish O8 chassis into a spare body kit I obtained for just this purpose.

The trouble is there's always something else in the build queue ahead of it.

I suppose at least that's prototypical......

Himself has been giving Dduallt a going over ahead of its visit to the shows in Troon and Perth in the coming months. 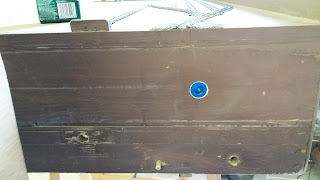 On thing which needs a little attention is the alignment dowels between the boards.

As you can see the the bottom of the picture, these were simple wooded pegs - the same as you get in most pieces of flat pack furniture- and over 25 years or so the receiving holes tend to widen and the fit becomes less accurate.

So he’s carrying out the same procedure he did with Bron Hebog last year and has retro-fitted two piece metal units.

This is one on the upper fiddle yard, set nice and high up near the track to minimise any deflection.
Posted by Rob Waller at 10:14 No comments:

Output at Himself's end of the operation has slowed on account of a spell of dry sunny weather which has necessitated his presence in the garden - well that's his story anyway.

While I was away, however, he did make a start on the prototype Gelert chassis. 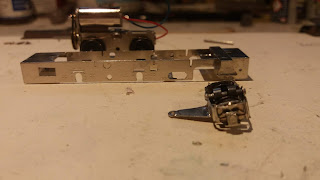 This, he reports, has been quite fiddly so far - he describes it as being in the watchmaking class.

(And this from a bloke who is onto his fifth Backwoods Garratt currently.)

The motor bogie - with its tiny can motor and rubber band drive - has been made up and can be see in the background.

Towards the front is the main frame and the rear pony truck.

Progress is on hold while he awaits delivery of a 16BA tap to make up the cranks.

I suppose the lack of any visible valve gear on this loco will cheer him up...

I've returned from a week's holiday and got straight down to work on the next project - creating an interior for 'bowsider' 20. 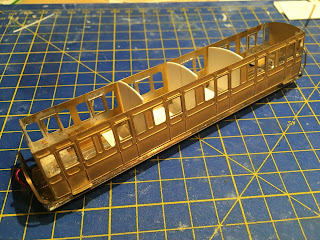 Like the others this will be made in three pieces on account of the change in floor level.

This later pair of carriages came with two first class compartments in the middle, and so my first step is to get the dividing walls made and positioned.

It is our second version of carriage 20 and will be finished in the (very drab) 1920s dark green livery with red ends to make up a Col. Stephens set with 16 and van 2.

This is all very cloak and dagger, but Himself has taken on a secret mission.

If you watched the recent TV documentary on Hornby you may remember they featured a modeller who volunteered to test-build their latest Airfix kits.

Himself is doing something very similar, the only difference is that we’ll get to keep this one afterwards. 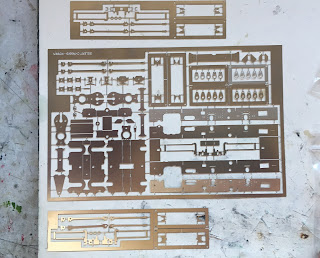 It’s a prototype for an outside frame chassis kit for the Baganall 0-4-2 tank, such as Gelert on the WHHR.

Even the packaging was very mysterious and must have puzzled the postie. 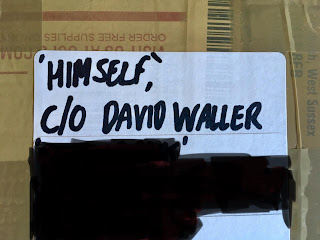 I’m limited in how much more I can tell you but hopefully I can post a few updates as the project progresses.

Himself’s occasional trips to Wales to volunteer on the FR have the added bonus of allowing a chance for a little spying in order to find out what’s coming down the tracks towards us. 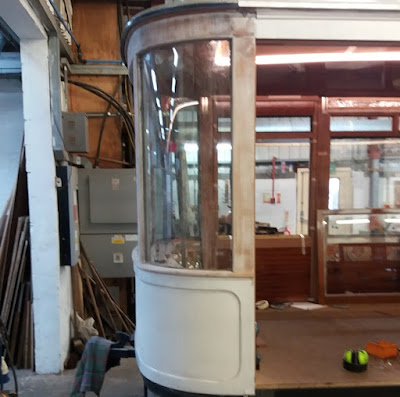 On this most recent trip he got a glimpse of the second WHR observation car under construction in the carriage works.

It’s clear there are going to be many differences to ‘Glaslyn’, most obviously at the end where it is of a much flatter profile, and the windows are vertical rather than being raked back, as on the original carriage. 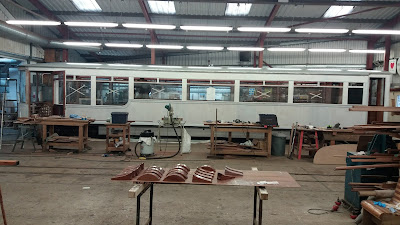 I’m fact, the side view shows that is something of a hybrid, borrowing many styling cues from the latest FR observation cars 150 and 152, but retaining the deep cantrail of the WHR carriages and the very shallow domed end on the roof.

Should be a challenge to make.
Posted by Rob Waller at 09:00 No comments:

(There’s always that element of doubt.)

Last night I added the electric connection on the corridor end. 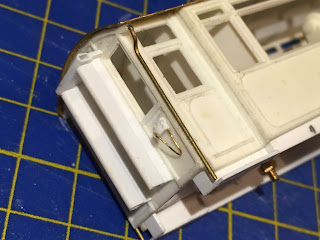 These are quite fiddly to put on, involving drilling down into a styrene rod and twisting fine brass wire, which is never my strong suit.

However I feel it’s one of those details which make all the difference, so it has to be done.

I shall now pass it over to Himself.
Posted by Rob Waller at 09:00 No comments:

One Small Step At A Time

It was such a busy weekend with other stuff that even this counts as an achievement. 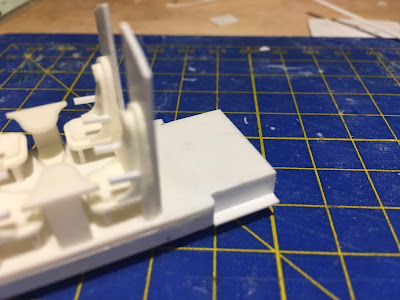 I suspect I may not be alone in finding that it’s the small snagging items, like these footsteps,which seem to take the longest to get done.

So all it leaves now is the electric connector on the end.
Posted by Rob Waller at 09:00 No comments: