How We Paint Our Buildings

Francis, the 'Artistic Director', has written this guide to how he achieved the paint and weathering effects on the farmyard buildings at Cwm Cloch Isaf.

To help key in the final finish I initially apply a basic primer to the structure. Halfords grey acrylic bodywork primer is as good as anything. When this has dried the next step is to apply a pale colouring to represent the mortar. No need to be too fussy as subsequent weathering will overlay this - an off white will suffice.

I favour acrylics so introduce water to thin the paint to a consistency that still 'sticks' but encourages it to flow into all those cracks and crevices replicated by the stones carved by hand into the plastic sheets. And the great thing is that you can keep experimenting until the mix is right! Well worth the extra effort as it will really lift the stone and slate walls. 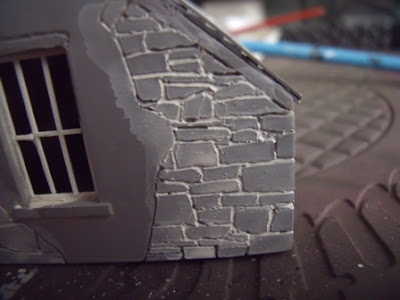 After working in the mortar colour I start to pick out the individual stone and slate blocks At best these buildings are a rather bland grey from top to bottom which only varies in different light or weather. There is little escape from that. However differences in the roofing slate and the occasional block of darker sandstone or slate in the construction does provide some relief!

I begin to pick out the individual blocks in a darker grey and you can begin to see how important the attention to the mortar is to the overall effect. Using acrylics I avoid the tinlets that purport to replicate stone, slate, concrete etc but simply call on three matt paints to recreate the various hues, Humbrol Dark Grey 32, White 34 and Leather 62. Occasionally matt black is useful for contrast and certain slate roofing may require a blue tinge courtesy of Humbrol 25.

Whatever, you cannot escape the overall blandness and must resist anything that isn't basically a variation of grey. Just look at the real thing or photos! 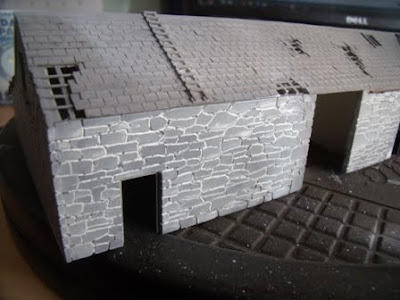 Many buildings of a certain vintage in this part of the world, both domestic and agricultural, have benefited from a layer of rendering to seal the coarse stone construction. Cwm Cloch farm is no exception and the evidence of previous treatment such as this reveals itself as if part of a Time Team investigation as you study the photographs. So this is the stage when you need to replicate that finish.

The same palette as before can be brought together to create that worn and weathered render finish. Again record photos will reflect the huge differences in the overall look, varying considerably depending on weather, time of year and time of day, so you make the choice on the final hue. However, you can't go far wrong by selecting a damp and dull look for Snowdonia if that is your subject!

What is evident are the pale spots of lichen on south facing walls, evidence of clean air if not dry! Capturing these with a slight touch of off white give an extra feel of autheticity. 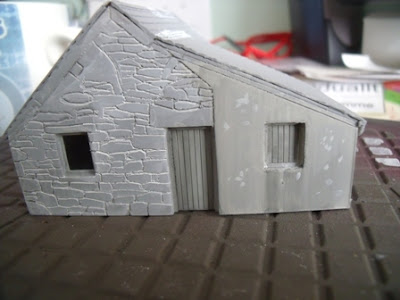 Examination of slate roofs will show that there is some variation in colour, albeit marginal. Weathering varies especially in shaded areas where natural light is blocked, where moss or lichen has got a grip or where the occasional slate can be paler in finish. So this is the point when should randomly pick out some of slates in a darker or paler grey. Don't worry if they look too loud, its more important that you create the contrast, later weathering will tone that down. 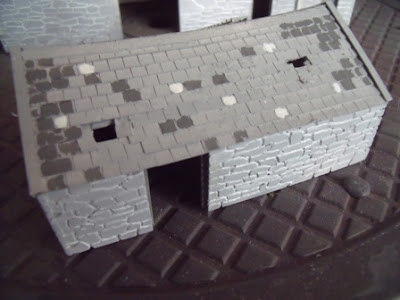 Take plenty of photos of your subject. Referring to a comprehensive set of images is the key to a realistic finish. Yes, there will be big differences in the look of the prototype according to conditions at the time but you can pick your preferred appearance from the evidence rather than guessing. Observation is the key. 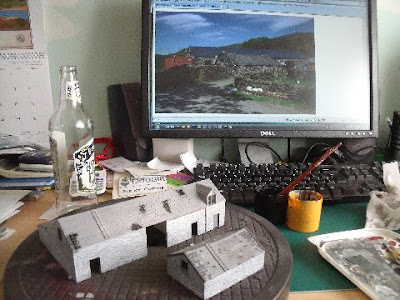 As with the slate roof, picking out individual stonework in the walls that is darker or sometimes paler, adds variation to the construction. 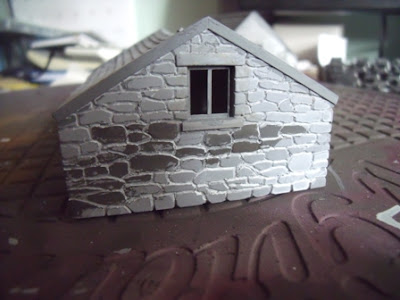 Rob's skillfull recreation of the collection of buildings that form the Cwm Cloch farm complex deserve the best treatment in terms of overall look.

Now that the principle variations in the stonework and roofing have been completed , the first layers of weathering can be applied. A thin muddy grey wash is drifted over the slate roofs, instantly blending in the seemingly harsh colours applied earlier to the odd darker or lighter tiles.

And Humbrol Leather is introduced to the grey palette to replicate the occasional richer sandstone blocks that punctuate the walls. The trick as ever is not to exaggerate these variations. That blandness that is such a feature of buildings in this area would be instantly ruined by stronger colouring and look artificial and contrived on the layout itself.. Tempting maybe to attempt a more vivid blue grey roof or darker contrasting stone work but, trust me, keep it 'quiet'! 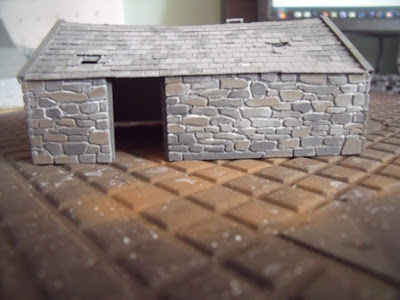 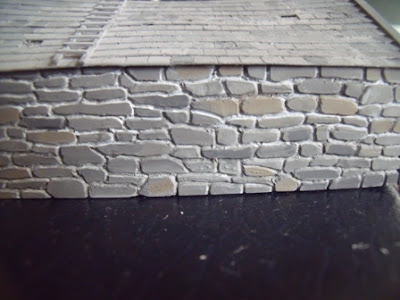 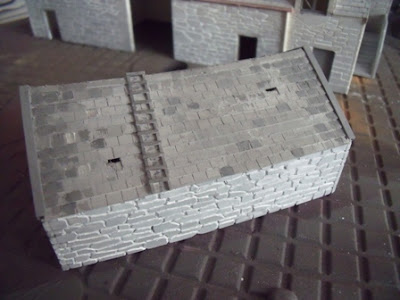 Further muddy grey washes can be applied until you are happy with the general feel of the building. A darker mix is more appropriate on the walls and roofs that see less sun and particularly those that face north or are damper due to poor maintenance etc. Gradually the mortar mix has blended in but really highlights the stonework.

These images may not fully reflect the level of contrast in the finish but they are not far off. Far better that the building sits comfortably in its environment and that the overall look does not clash! 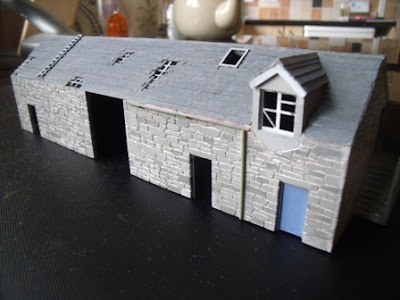 If there is one recommendation in all of this it is to...reduce that palatte! Don't struggle with a plethora of paints and especially those that claim to recreate what are essentially natural colours such as concrete or slate. Just three matt paints, white, dark grey and leather, will mix together in varying quantities and convey the full spectrum of hues on stone or brick buildings.

You can always add but you cannot remove. Modelling is about reduction, reduction in scale, detail and finish. And that means reducing the colours you apply that in model form will always be softer and weaker than the full size equivalent. Whatever you are recreating with paint, tone it down. If in doubt..add some 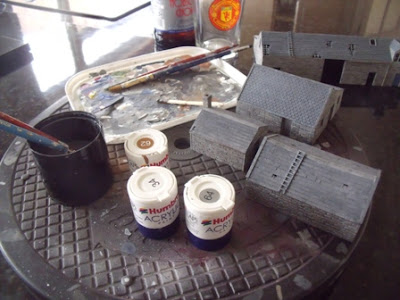