I dropped hints at the weekend on the Bron Hebog social media feeds that things were about to happen with our old Blanche. 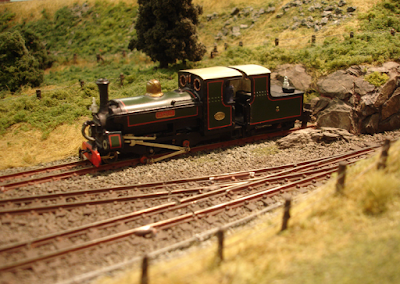 This is our original model, made from a Dundas white metal kit with an Ibertren chassis adapted with outside fly cranks, which failed quite spectacularly at an exhibition around 8 years ago.

It has been replaced in service by a Backwoods kit and has sat on a shelf for all that time since.

Rummaging around in his chassis bits box for gear wheels for the Garratt seems to have prompted Himself to take a look at getting it going again.

The thing which stopped the engine was the front 'clock side' fly crank falling off the axle, but the underlying fault was with a gear wheel which was going out of mesh and affecting the quartering,  putting the motion under strain with the inevitable result.

Putting it all right has been quite involved. 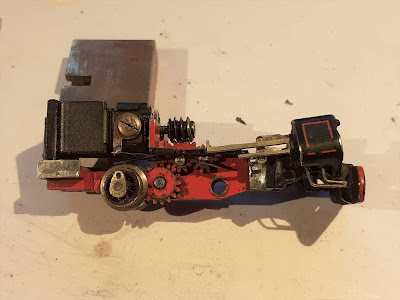 Himself has had to make up a new front axle and bearing, and change the gear wheel which drives it.

To do that he had to replace the stub axle the gear revolved on which has broken off in the old chassis - perhaps the root cause of the original failure?

He tells me that there is now noticeably less slop in the front axle and it doesn't disengage the drive gear.

That things are getting a little worn is no a surprise given than it put in 20 years hard service on Dduallt! 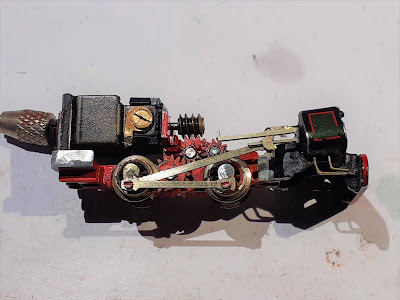 The cranks have been refitted and quartered, and the next job is to cut some new fake side frames from styrene as the old ones have gone brittle and are broken.