I found a soldering iron in my stocking left by Santa on Christmas morning, Today I've had my first chance to try it out. (And I haven't needed to visit the local burns unit, either!)

Soldering is a new modelling frontier for me. Until now whenever I've needed to use brass I've managed to get away with bonding it to styrene. But I've had to cross the Rubicon with the Romanian ballast wagon.

The culprits are the control levers for the ballast dropping mechanism. 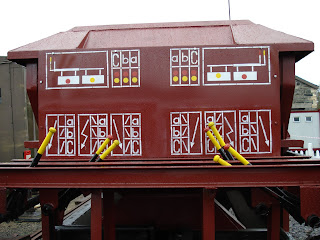 Brass wire was the obvious material to use but because there are two levers attached to each shaft there was no alternative to some brass on brass joints. It was time to learn how to solder.

Himself gave me some lessons on his last visit a few weeks ago and I practised joining up some random bits of brass wire, ending up with something that looked like Terry Gilliam's plumbing from the Monty Python title sequence. So far so good.

The tricky bit with the levers, I reckoned, was that the two joints are so close together that I wouldn't be able to put them on one at a time without the first one coming un-soldered when I tried to add the second. So I decided the best tactic would be to try to solder both with one application of the iron.

But how to hold them in place? The levers are only 9mm long so they were going to get very hot if I tried holding them in place with my fingers.

Next I thought of trying to hold them in place with blu-tac or plasticine but I couldn't find any in the house. The best I could do was my daughter's play-doh but that turned out to be a little too soft to hold the levers in place.

So I came up with the idea of inserting them into a rubber. And it worked rather well. 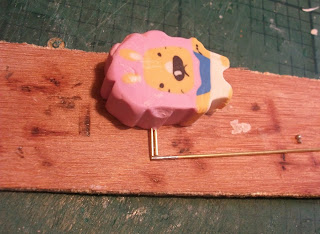 Here are the completed shafts / levers in place on the wagon. 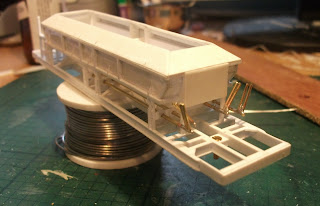 And now with the frame in place around them. 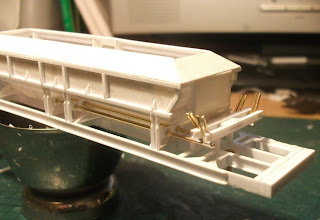 Altogether an encouraging first adventure with the iron, I'd say.
Posted by Rob Waller at 16:56