I have posted before about how Boston Lodge has developed a hybrid SAR wagon design which has been dubbed the BZ.

It features a large centre door within otherwise fixed sides, just like a B wagon, but it is built to the much more user-friendly height of a DZ wagon.

It also has another Welsh innovation which is end pieces that are hinged to fold down flat so that, when parked, a rake of wagons becomes a drive-through platform. 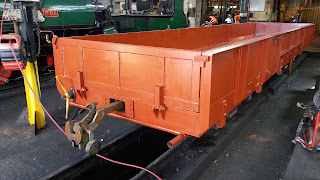 Himself saw the second of these nearing completion while he was volunteering on repairs to the works recently, and returned north with the unwelcome (but inevitable) news that they are not identical.

Far from it, in fact.

This second once has been built with a major revision to the side door arrangement.

Instead of a door which was the same width as on B wagon, on this 2nd BZ it has been extended to occupy the space of two of the previously fixed panels either side. 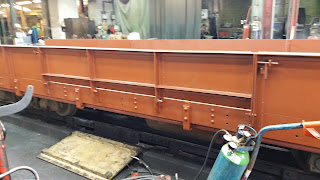 Compare the latest wagon above, with the first version below. 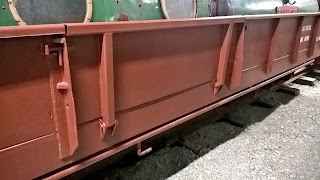 It would also appear that the most recent one has been converted from an existing DZ - the brackets along the side being the giveaway.

The significance of this, of course, is that it scuppers any ideas I held of making one master model and casting a run of them.