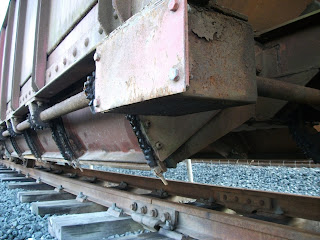 With both wagons now at the same stage, with all the external struts in place on the hoppers, thoughts turn to what to tackle next.

I think I'll go below decks and start on the doors that spread the ballast. I never took any measurements of these so there's going to have to be a lot of extrapolating from photographs and the known knowns, as well as a bit of trial and error to begin with.
Posted by Rob Waller at 21:14 1 comment:

Can you tell what it is yet?

Most of the struts and straps are now in place on one of the wagons.

I think it's starting to take on a convincing look of the real thing, no? 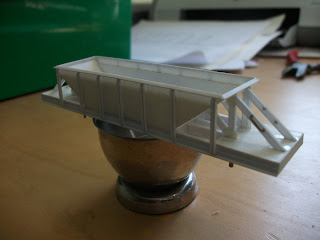 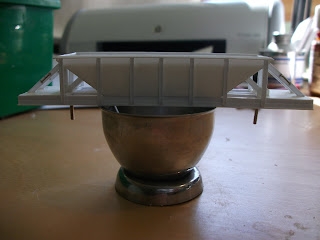 Being geometrically challenged (see previous post) making the angled support struts at either end of the hoppers could be a potentially time consuming and frustrating business, resulting in a lot of wasted styrene strip with multiple attempts to cut pieces to fit. 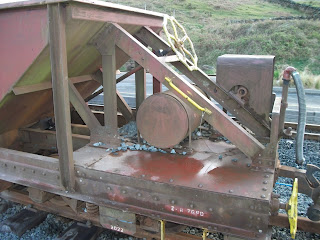 So I've come up with this wee device which I hope will help with the fabrication of these struts (and there are 8 of them on the 2 wagons) and with a bit of luck they'll come together in jig time. 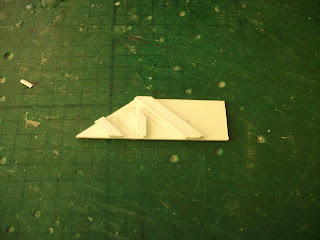 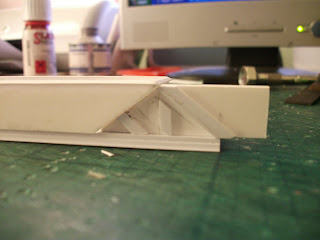 I won't be able to put this jig to the test until I get my hands on the 'I Beam' Evergreen strip I need. It's currently caught up in our wonderful modernised postal service, who have so conveniently moved delivery times towards the middle of the day when you can all but guarantee there'll be no one in the house to sign for recorded delivery items such as the aforementioned styrene strips.

It's progress apparently.
Posted by Rob Waller at 21:09 No comments:

A start's been made on adding some of the detail to the hoppers, begining with the pronounced angled lip at the top. 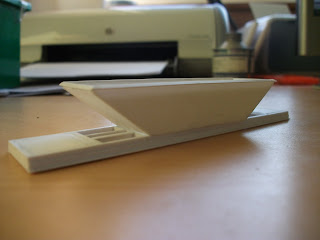 The top edge of the hoppers were filed down at a 45 degree angle and 15" x 60" strips were attached.

I've never been too hot on geometry so it took a number of attempts to get the angles right at the corners so they joined without a gap. I have the same problem when trying to make hipped roofs on buildings.
Posted by Rob Waller at 20:50 No comments:

Another session with the South African ballast hoppers today, at the end of which I have two frames and the basic shells of the hoppers completed. 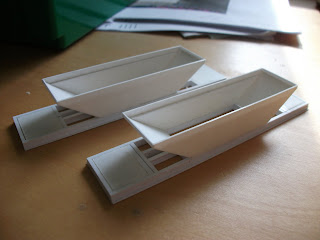 I've built the hopper shells out of 30" styrene, but as extra insurace against warping the sides have been backed with pieces of 60" sheet. I'll be damned if that will lose its shape! 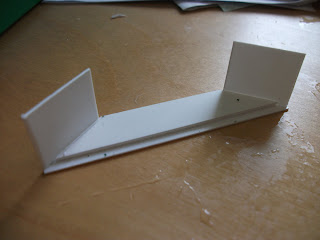 The backing pieces won't show up on the finished wagons because I'll be representing them both as fully loaded.

So far they've come together very swiftly but, on these two especially, the devil really is going to be in the detailing.
Posted by Rob Waller at 19:08 No comments: 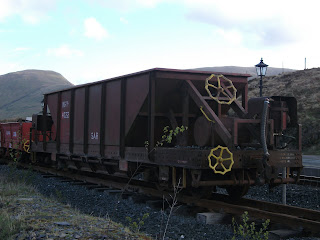 Next up on the workbench will be what have arguably been the two most vital items of rolling stock during the project to rebuild the WHR - the South African AY ballast wagons.

Drawings of these vehicles have proved illusive, so I'm going to be relying on measurements I took myself and there is considerable scope for error. However, (finescale followers avert your eyes) I shall fall back on my modelling maxim that if it looks right it is right.

I think I shall make both at the same time, because previous experience suggests that if I make only one, by the time I come back to do the second I'll have forgotten what I did with the first!

Stage one is to fabricate the main frame / chassis. 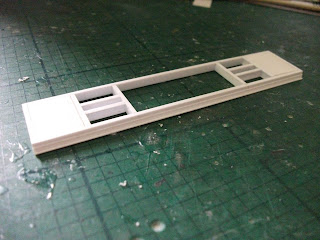 Table By The Window? 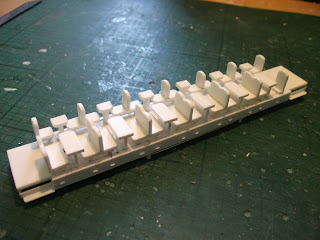 A free hour before leaving for work. A sheet of 60", scalpel, ruler and a bottle of Mek Pak and that's 103's table's sorted.

The snagging list shortens.
Posted by Rob Waller at 10:45 No comments:

After correcting the Ffatal Fflaw discovered last week with the fitting of replacement bodysides there's been some steady progress on 103 in the last few days.

14 seats have been fabricated and fixed in place on the underframe assembly. 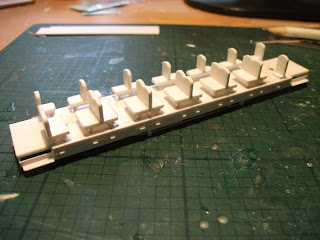 The underframe also required remedial action, because I had lined up the tiebars and the hangers according to the window frames; which were of course wrong. So they had to be ripped out and new ones made up (which also meant a 50 mile round trip to the nearest model shop for more brass!)

The little lugs on the outside of the frame, which I assume were welded on to support the wider bodyshell, have been added on with wee off cuts of strip. Footsteps at the doors are also in place now. 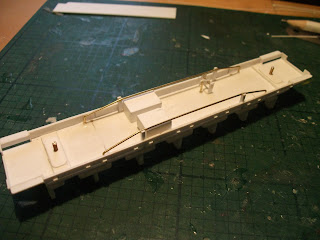 The main tasks remaining now are the 14 tables, the vac pipe and hoses and electrical connections at each end.
Posted by Rob Waller at 20:55 No comments:

A cautionary tale today of one of those modelling catastrophes that happens to all of us every once in a while.

In this case it's because I forgot to follow the golden rule of modelling the FR - never assume anything on a drawing until you've confirmed it on the prototype.

My Superbarn 103 had been progressing well and I was double checking battery box locations for the underframe when I noticed to my horror a fundamental problem with the bodysides. As Eric Morecombe might have said, I had all the right windows, but not necessarily in the right places!

I'd built the carriage using one of the draft drawings, and while I had picked up on a few detailed differences with the finished product I never noticed that the window positions had changed. Basically, one at the Port end has been made narrower than on the drawing and the one at the Blaenau end wider.

Once I'd finished cursing my stupidity I considered my options. I was reluctant to start again from scratch because the carriage was 80% complete. So fitting a new blade in the scalpel I set about attempting to amputate the bodysides from the rest of the carriage. 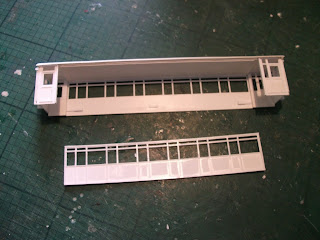 One of the advantages of making up the model from sub-assemblies, as I described in an earlier post, is that it is possible, with care, to remove sections in this way.

Now it was simply a job of knocking up two new bodysides. 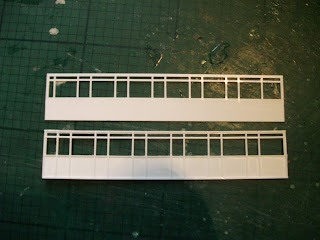 5 hours work later and I was back to where I began. 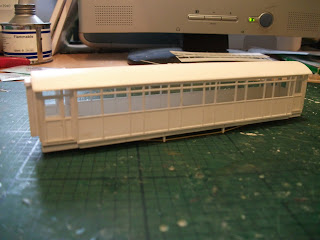 I'd like to think I've learned my lesson, but the Curse of Boston Lodge will surely strike again.
Posted by Rob Waller at 17:14 No comments:

There's been some progress on 'Superbarn' 103 recently, concentrated mostly on the underframe.

The way these carriage builds usually work for me is that the bodyshell comes together very quickly but its the making and fitting of the interior and other details that eats up most of the time.

My underframes and interiors are built as one sub-assembly which fits up inside the carriage body. The glazing will eventually be slipped between the seats and the carriage sides keeping the whole model straight and square. If styrene is not kept in tension it tends to bend or warp as many modellers have found to their frustration. 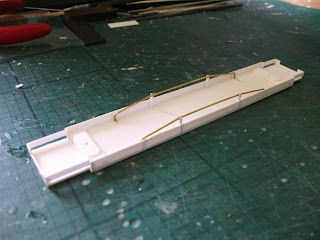 The base of the floor / underframe is cut from 60" sheet and stops are glued inside the carriage to set the running height. Strip has been added underneath to represent the very obvious steel frame the carriage body sits upon and brass wire shaped and located to complete the underframe.

Vacuum cylinders, battery boxes, diesel tanks and other gubbins associated with the heating system still remain to be done, as do the steps beneath the doors.

Here's a view of the carriage turned upside down to show how it fits in place with the body. 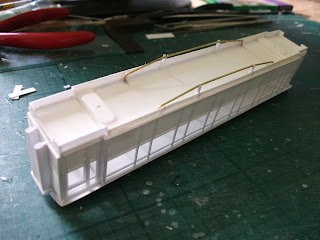 Next up the rather repetitive joy of making lots and lots of seats and tables....
Posted by Rob Waller at 18:53 No comments: