Princess has returned to the test track from Himself's where it had been sent for the application of a little subtlety. 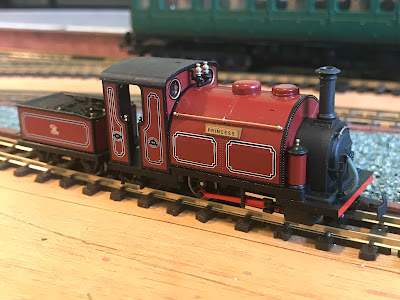 As it comes out of the box the Kato / Peco England has a number of things which betray that it was produced to a price - or for a certain aspiration of specification -  but these can be easily attended to.
Among the things Himself has done is apply some black paint to the upright at the end of the slidebars, which stands out like a sore thumb in silver.
A brush over with matt varnish makes the smokebox look like a loco that's had a fire in it, and the cab roof looks an awful lot better when it's not black and shiny.
It's also had the happy effect, to my eyes, of making the chimney look a bit fatter and much more prototypical.
The vac pipe bags look a lot more realistic when they are no longer black plastic colour.
The last thing he's done, which you might not notice until I point it out, but is one of those things you can't unsee once you've spotted it, is to run some black paint around the edges of the cab opening,
The livery finish on these models is really very good, but they are badly let down that in places like the cab doorway the black edging is only on the sides and doesn't extend to the edges which remain shiny, maroon-coloured plastic.
It really stood out when you looked at the engine in 3/4 view.
It's such a small thing but it makes such a difference when you fix it,
Posted by Rob Waller at 06:00 1 comment:

A Bit Of Bob

It's been so long since I did any narrow gauge model making that I can no longer remember what it was, or when it was I was working on it.
However, the castings for FR super saloon 808 (aka BOB) have been gathering dust on the shelf and pricking my conscience for many months now, so I this week I decided I'd better pull my finger out and do something with them. 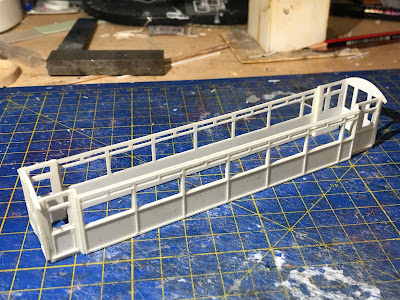 Part of the reason for the long delay - aside from a general lack of motivation ever since the Glasgow show - is I had run out of the 60 second superglue I've taken to using for assembling resin parts.

It has the benefit of allowing a decent amount of repositioning while not leaving you waiting for ages for the parts to bond, which I've found has always been the case with the so-called 'rapid' epoxy resins.

However, in one of the small DIY shops in town - and we are fortunate to have two here - I came across a 90 second Araldite product which comes in a double syringe dispenser thing.

I was sceptical whether it would actually bond in 90 seconds - it's more like 490 in my experience - but the join does seem to be less brittle than one made with superglue is.

We shall see how it stands up to all the handling as I fit the floor and roof.

There are a few things in the railway modelling scene which defy their age, and some of them are in the old Kitmaster range of injection moulded plastic kits.

Despite its longevity I reckon the footbridge kit is still up there as one of the user-friendly and adaptable you can get. 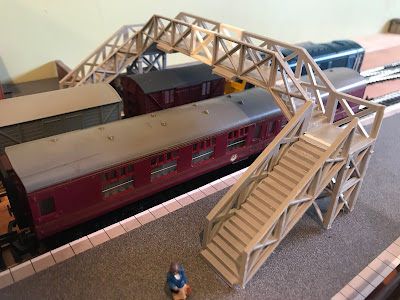 I first knew it when it was branded as part of the Airfix range, and these days it's under the Dapol banner, and we had one on our large OO gauge layout in the loft.

It was the obvious choice for me to use at the station on the 'test track' because I needed something that wasn't standard sized and could be kit-bashed to link platforms at different heights on the standard and narrow gauge.

As luck would have it I found one in a bargain bucket at the Kyle MRC show in Troon on Saturday where the Greenock club were exhibiting their small Banffshire terminus layout Inverboyndie. 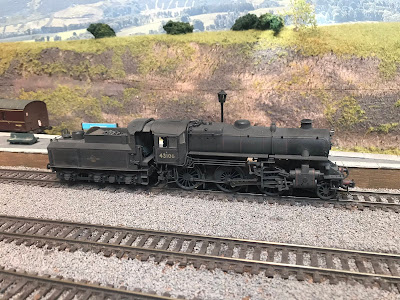 The first change I made was to cut out one of the sections on the upper set of stairs, because if you mount it on a platform the deck of the bridge is so high it would give the passengers vertigo!

The second, more involved, alteration, was to insert an extra segment into the deck to stretch it to the length I needed.

This classic kit has always come with the option of a plain sheet section in the middle, which could be used as an advertising hoarding, but I've never been convinced that it looks very prototypical (although  I'm sure somebody will prove me wrong) so I prefer to have another cross-brace section.

With no spare parts available in the kit I rooted about in my diminishing stock of Evergreen strip and found some stuff that was roughly the same dimensions, and knocked up something that could be used as a master to cast pieces to be inserted between the two halves.

Being slightly impatient, and keen to get the job finished in a day, I made up some RTV rubber with a generous dosage of catalyst which meant the mould was set within a couple of hours and I could quickly cast my two copies with the last dregs of resin I have available.

With that done the first section of the bridge is complete.  Now I need to buy a second kit (probably at full price on the web) to complete the second half stretching across to the NG tracks.

Big projects rarely end with a bang, and so it is with model railway layouts.

Himself has declared construction of Bron Hebog is finished with the insertion of a series of brass speed restriction signs in the appropriate places around the layout. 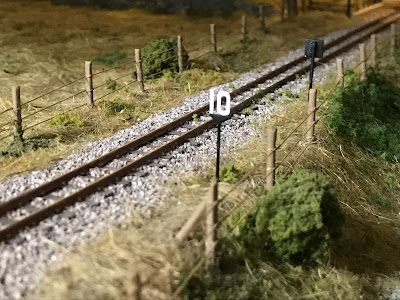 Like Frank Sinatra I suspect that it's not actually over, and in time we'll no doubt find a few scenic improvements to make.

For example, the temporary toilet blocks at the pedestrian entrance to the station are something he keeps mentioning I need to have a go at.

But for now, at least, that's it signed off.

Next stop is the Perth show in around seven weeks time.

Himself has been tinkering with the prototype flat wagon to try and improve its ability to stay on the rails.

The first runs at the Glasgow show suggested that the all-resin construction is a little on the light side when faced with the kind of complicated point work we have in our fiddle yards.

His idea was to fix a layer of 'liquid lead' shot on the underside of the wagon floor and I'm told initial tests suggest it is an improvement.

Were I to make a second version I think I might experiment with adding some lead shot when I pour the resin into the mould for the base of the floor which is hidden with the durbar plating.

I did consult a friend who is a doctor of chemistry to ask if mixing lead and resin was a foolish idea?

But his advice was it should be no more toxic than casting with resin already is....

Things have been a little quiet in the world of Bron Hebog these last few weeks - at least on this blog - but we've been quietly working away on various projects in the background and one of them is ready to break cover.

Himself has been painstakingly painting and lining our model of bowsider 18 in its current peak-Victorian livery.

This is a Worsley Works brass kit and the gold lining is all done using the narrowest of the waterside lining and corners range from Fox Transfers.

I think it looks absolutely gorgeous.

This completes our set of vintage bogie carriages, although I suspect Allan Garraway would have had something to say about the order they've been marshalled for the 'works photograph'.

Himself would probably had been summoned to the managerial suite and informed - in no uncertain terms - that this is not an Irish tramway!

(Not) Ready To Run

It wouldn't surprise me if Peco's PR people are a little frustrated this weekend.

(And if they're not, then they ought to be.)

For days my social media feeds have been full of excited narrow gauge modellers receiving their England engines, but as the week wore on the pictures changed from delighted owners posing their new pride and joys on their layouts, to disappointed customers posting images of their purchases arriving in various states of distress and disassembly.

And then our one turned up. 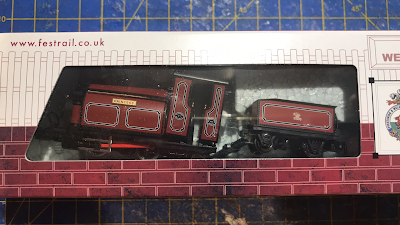 Our Princess had been ordered by a customer as a thank you for a model I'm making for them, and I opened the parcel fearing the worst when I saw how it had been dispatched in an over-size cardboard box with plenty of rattling-around room, even with the protection of bubble wrap.

As you can see, a certain amount of owner reassembly was required - which is putting it mildly!

The cab was detached (which seems to be the most common complaint) and the tender and engine had moved around so much they had become decoupled.

Lifting it from the - obviously inadequate - polystyrene tray I discovered the whistles had also fallen off.

Fortunately the pins securing the coupling rods remained in place - others have not been so lucky.

Perhaps because of decades handling white metal and etched brass locos it's alarming how flimsy and delicate these 009 RTR locos feel - not just this England - and there is genuine trepidation when attempting to re-fit the displaced parts that you're going to further damage the model while handling it.

Fitting the extra knobs which come in the pack, on the sand pots and the front of the tender, can be quite tricky too.

It's a clever design with the plastic sprues which break off once you've inserted the details, but as I found to my cost, if you don't push them in perfectly perpendicular then they can snap off in the wrong place.

I had two which did this and had to be very carefully drilled out,

It's lucky they provide spares.

Now all that's been done I can get on with trying it out on the test track before passing it over for Himself to have a play about with. 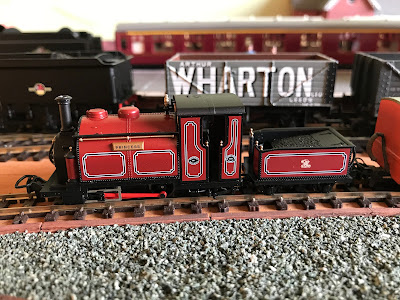 One last thought is about opinions I've seen on some social media groups that owners should now cease posting pictures or comments about the state that their models have arrived in, and that we should just be grateful that they've been produced in the first place.

I have to respectfully disagree.

It's not for the consumer to be grateful for any commercial product, let alone one in which a substantial number arrive severely damaged because of packaging which, on the face of it, is not up to the job.

Retailers are replacing them without any quibbles, as far as I can tell, which is as it should be and very good to see.

But there's no getting away from the fact it really shouldn't have happened in the first place.