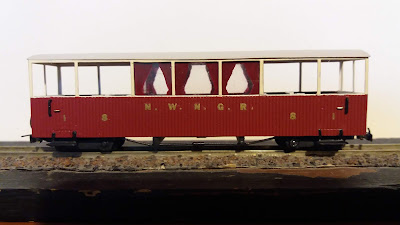 The last job was to paint the curtains on the posh compartment in the middle which has worked out quite effectively.

You might also notice there’s been another change inside since the last update I posted. 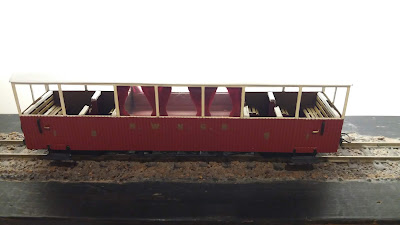 That’s right. I won the argument about the colour of the fabric on the bench seat which has been repainted pink.

To my eyes that’s the dominant colour of the rather exotic moquette.

But for genetic reasons Himself and I don’t see eye to eye on colours always.
Posted by Rob Waller at 08:00 1 comment:

The Worsley body ‘kit’ for the WHHR Ashbury ‘Buffet Car’ has been soldered up and passed over to me to make up an interior. 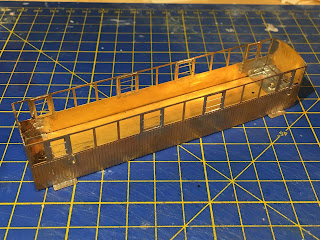 That’s going to take a little bit of research and puzzling out because I’ve never taken any photographs of it, and from what I’ve been able to deduce it’s quite a complex carriage with its counter, upholstered longitudinal benches and another section of traditional face-to-face seats.

But where, exactly, they all fit in is what I’ll have to work out.
Posted by Rob Waller at 08:00 3 comments:

The first navy blue topcoat is being applied to Gelert. 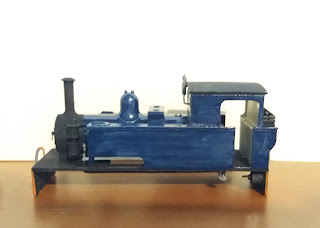 Himself is still not entirely happy with the way paint takes and dries on these 3D printed bodies, even when they’ve been cured in white spirit and primed.

It looks a little ropey just now, but just like with Lilla I’m very confident with how the finish will turn out.
Posted by Rob Waller at 08:00 1 comment:

Those who know their Westminster history may appreciate the irony in almost completing our latest Worsley Works carriage as BoJo becomes the UK's political leader. 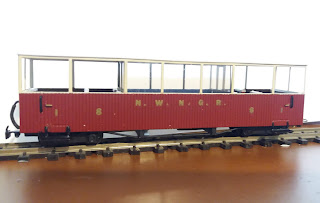 The man reputed to have ridden in this carriage would probably have a lot to say to the latest tenant in Number 10 Downing Street.

William Gladstone was a Prime Minister who also knew what it is to split your Governing party on the defining political issue of his generation, and which also involved the very delicate question of the future of the island of Ireland.

Rather than relaxing by making models of buses from old boxes (or so we are led to believe the PM does) Mr Gladstone liked to use his spare time chopping down trees and seeking out so-called 'fallen women', to guide them back onto the path to righteousness.

What you really want to know is that Himself has completed the lettering on the NWNGR carriage.

We decided not to bother trying to replicated the intricate, shaded letters, and have used just gold waterslide transfers from the Fox range, and I think they look effective enough.

All that remains is to source a suitable shade of pinky/purple paint to create the curtain effect on the glazing in the centre compartment.

It's a strange coincide, but for the last couple of years, just as I am about to go on my summer holiday, another rare and much-needed Backwoods kit lands in our lap. 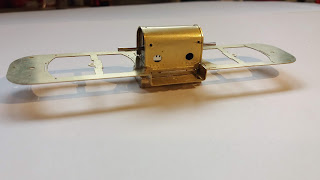 A couple of weeks we were delighted (and very grateful) to be offered the chance to buy - at a sensible price! - a fourth Double Fairlie in order to make a model of the forthcoming James Spooner.

Himself has been unable to resist the urge to start building it, although I have cautioned him most earnestly not to get ahead of Boston Lodge Works as they build the real one.

So far just the boiler cradle has been completed, and mounted on the bogies formerly running under the Earl, and that's probably as far as we'll be able to go with the model for the moment, too.

In the light of recent experience with our eldest Fairlie, Merddin Emrys - which needed a brush transplant -  Himself has decided to follow the adaptation suggest by Nick Welch in his book Ffestiniog Odyssey, to allow the motor to be removed from the locomotive, rather than trapped forever inside the firebox as the kit was designed to be put together.

This involves making a small bracket and drilling, tapping and inserting screws into the fronts of what, on the real engine, would be the ash pans. 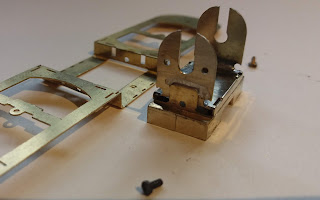 You also have to cut an additional slot in the cradle frame which holds the motor.

Now in future, once the firebox wrapper and the cab roof are lifted clear, you will be able to undo the screws and either lift the motor out from above, or drop the whole cradle out from below the engine. 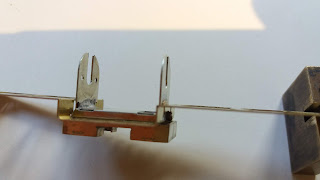 The next move will probably be to build up the power bogies, and you will, of course, be able to follow the progress here on the blog.

I got a very pleasant surprise a couple of weeks ago when one of the luminaries of PECO Publications told me that they’d dug out the pictures of Dduallt taken a quarter of a century ago to use in the latest of their special editions. 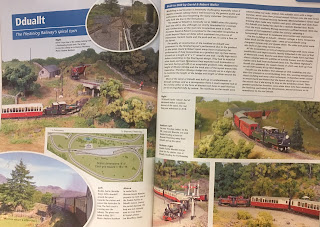 This magazine is the latest in the series and is all about modelling the preserved railway scene, which is something I’ve been involved with since I was a a schoolboy, and which is very much overlooked. 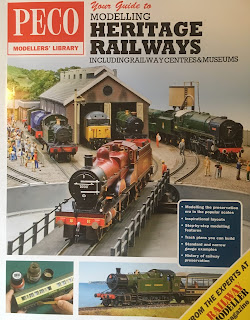 The images, shot by the legendary Len Weal after hours at one of our early exhibitions, are historic in their own right in that they feature much of our first generation of rolling stock, much of which has been retired, sold or, in the case of the Langley Merddin Emrys given away as a gift to a former FR luminary.

Have the years been kind?

Why not buy a copy of the magazine and let us know?
Posted by Rob Waller at 08:00 No comments:

Himself is being mindful not to get ahead of the boys at Dinas in our build of NGG16 130 but one thing we do know is that the new tanks and bunkers are plain welded ones with no rivets. 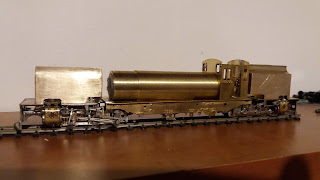 For this it’s necessary to file off the rivets half-etched by the esteemed designer of the kit, who would most definitely not approve. 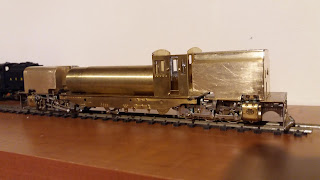 It’s looking a lot more complete now, but there are still many details which we won’t add until we see precisely where they’ll sit on the reality one.

I've had one of my oldest models returned for repairs.

This is a 4mm scale model of the idyllic cottage where I was lucky enough to live during my second year at university - quarter of century ago. 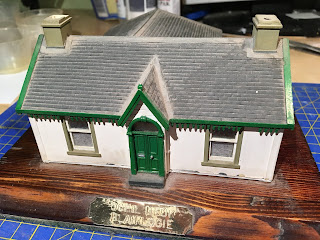 It was made as a birthday present for my 'cottage mate' who loved the place as much as I did.

At the time I didn't have the skills to make a protective perspex case, nor know anyone to approach to do it for me, so the model has been open to the elements ever since.

All things considered I think it's stood up pretty well to living on a shelf in a dusty house with children and crazy pets, but it's beginning to show some obvious wear and tear and I've been asked if I'll give it an overhaul.

When I handed it over to my friend I told him it came with a lifetime guarantee and it'll be my pleasure to restore it, I hope, to its former glory.

They've been delayed by quite a few months, but finally I've received the etches for the carriages we need to finish our WHHR set. 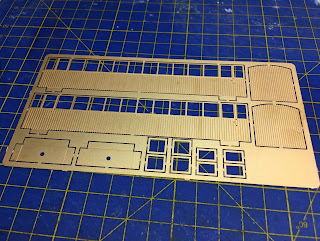 These are Worsley Works 'scratch aid' kits for the two Ashbury carriages at Gelert's Farm - the NWNGR corridor carriage replica and the ex-WHR 'Buffet Carriage', which is a cut down version of the same type. 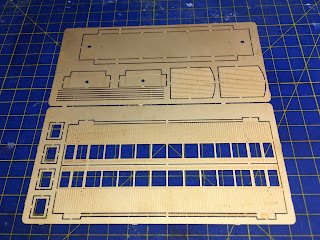 As is the way with Worsley kits all you get are the etches for the body and floor - no roof or bogies - and you don't get the luxury of instructions of any kind either.

Fortunately for us, Himself is very proficient at solving these puzzles, and if we get a following wind it's perhaps just possible that we might be able to get them ready to run on Bron Hebog when it's on show at the end of October, to recreate Russell's recent historic runs to Beddgelert.

Except ours will probably venture a little further up the hill towards Rhyd Ddu….
Posted by Rob Waller at 08:00 No comments:

A new item of stock which didn't manage to make it to the show at Perth was the Gladstone carriage which is still in the process of being painted and finished. 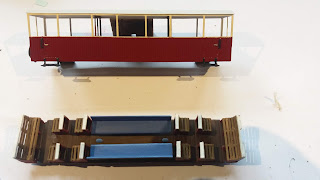 Not that it matters anyway, because the real thing would never appear at Dduallt anyway, but as the years go by we've started to bend the rules and run things - like a WHHR set - just for the fun of it.

The carriage has had a couple of coats of Humbrol gloss paint, which is applied - very carefully - by hand. There is no masking tape used to get he join between the red and the ivory, it's just a question of concentration and a steady hand.

The colour of the seats in the centre compartment has been a matter of disagreement. To my mind the fabric on the real carriage has a distinctly pink shade about it, but I was overruled, with the deciding vote coming from someone who's authority is not to be questioned.

So blue it is.

We've also gone through a lengthy process of deciding what to do about the N.W.N.G.R lettering on the side.

On the real carriage these are gold letters with partial red shading, but we've been unable to find anything equivalent to that.

We could, of course, go down the route of commissioning a bespoke set, but we've tried out some plain gold letters as a test and concluded that the red shadows probably wouldn't show up very clearly against the colour on the carriage anyway.

It’s been a while since I’ve gone so long without posting, but it’s been a very busy few days showing Dduallt at Perth. 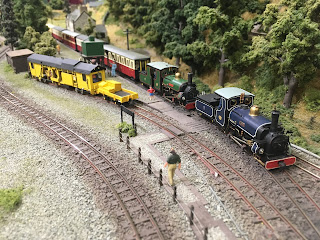 It was busy but also hugely enjoyable.

In my opinion this is the best exhibition in Scotland and comparable with the really good ones down south too.

If you've never been don't dismiss it on account of the distance. Not only is at a great show but you can combine it with a visit to one of the most stunning parts of this island. 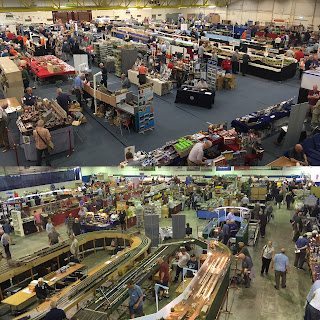 The show fills two very large halls and attracts a very high quality of layouts, and as an exhibitor you are looked after royally by the Perth MRG - where else do you get a dram of finest malt whisky brought round to you as you operate?

There was a terrific social evening on the Saturday where we were taken by bus to a barbecue at the Wester Pickston Railway - a charming miniature gauge line running through the woods with trains steamed up just for us. 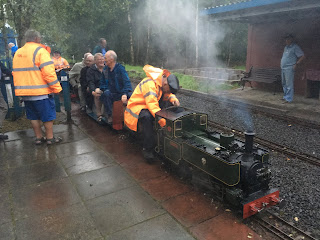 The layout ran well over the two days of the show and half a dozen members of the Greenock club had their first taste of operating it.

Nearly everything from the stock box got a run over at some point over the weekend, including a few interlopers. 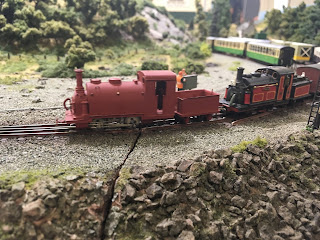 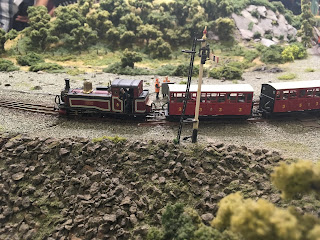 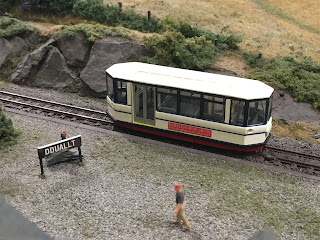 The next show for us will be giving Bron Hebog its Scottish debut at our home show in Greenock in October.