Why does no one ever tell me?
There I've been, merrily posting pictures of progress on the sides of buffet car 144 and it wasn't until I neared the point when I thought it was done that I noticed it..
There was one window too many! 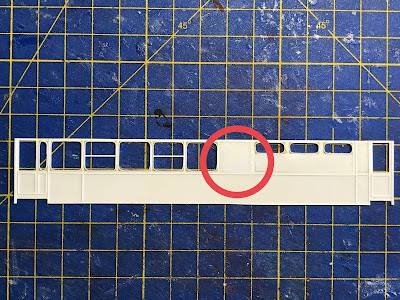 I suspect I misread my homemade drawing and instead of blanking off the space I unthinkingly rounded it off like the rest of the windows.
Never mind, the beauty of modelling with styrene - and why I get on so much better with it than metal - is it was the work of seconds to rip out the strip forming the window frame, clean out the Milliput in the corners, and insert a snugly-fitting square of styrene in its place.
Posted by Rob Waller at 07:00 No comments:

The Rev. Awdry book you won't find on anyone's shelves is the one titled 'Shitty the Shunter'. 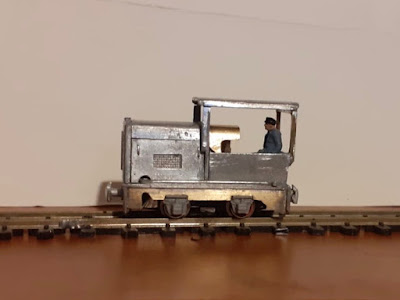 Himself has been cracking on with Harold II, competing all the alterations and additions to the basic white metal body.

Thanks to the tiny coreless motor installed in the Arnold Kof chassis the cab area is open and there's space to put a driver.

The rear of the engine cover and the roof supports are made out of brass, as are the chassis frame pieces at the sides. 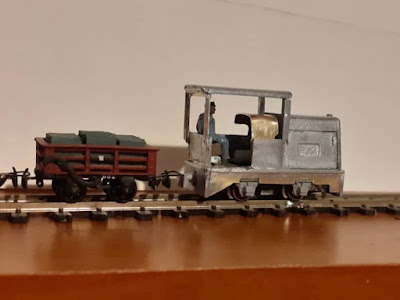 The axle boxes have been repurposed from a set of Dundas VoR carriage bogies.

It's a shame we don't have a Boston Lodge diorama on which to run it.

What excuse can we come up with for the occasional foray to Dduallt or Beddgelert??

The one thing the trio of Carnforth INCA carriages have in their favour, from a scratch builder's point of view, is they have very much less beading than almost any other FR vehicles. 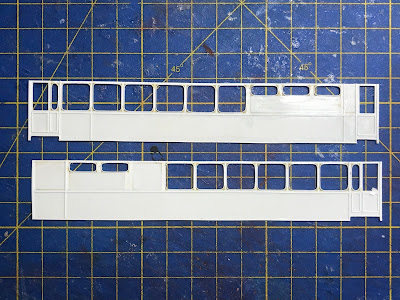 Once the biggest headache of making the rounded window frames is overcome, it doesn't take too long to add the rest of the surface to each of the sides.

On this build I'm using strip which is 50% thinner (0.10") than the stuff I would use on my own models to try and get it to match as close as I can to its etched brass running mates.

The last thing left to do on these is to add horizonal bars on on the windows which opened, which were fewer on the buffet car than the two composites.

There's been some gentle progression on the commission to scratch build a model of FR buffet car 114 in styrene this week.

Before I can start adding a second layer of detail on the sides I needed to fill the gaps at the corners of the window frames. 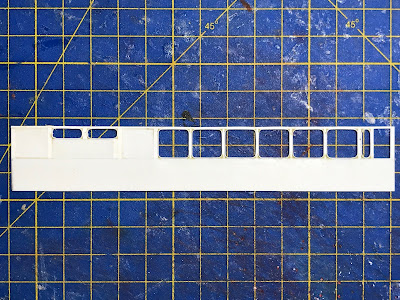 My favourite material for these jobs is Milliput.

It doesn't dry too quickly and crumble like the sort of model fillers you squeeze out of tubes, and if you wet the surface it will flow into the tiniest gap and leave a brilliantly smooth finish, as well as setting very hard.

I've also made the base pieces for the two ends of the carriage. 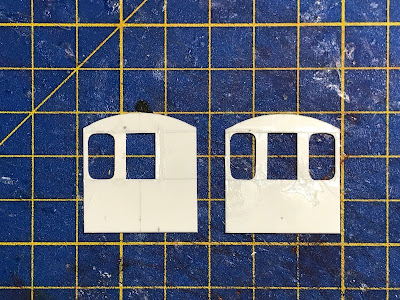 For these I've used a different technique to get rounded corners, this time gluing tiny triangles of styrene strip into the corners and using a file to shape them.

Having run low on projects I suggested to Himself that he should pick up with the build of a replacement Harold -  aka 'Shitty the Shunter - which was at one time the stalwart of Boston Lodge.

Long term readers of this blog may recall our original model was apparently stolen at an exhibition many years ago.

(I am still hopping mad about this.)

We obtained another Chivers white metal body to kit-bash but didn't have a working Farish DMU power bogie for it, so it sort of stalled.

Discussing this during a walk on Mother's Day I wondered aloud whether one of our strategic reserves of Arnold Kof diesel chassis would do the job instead?

Himself took a look. The wheelbase was ok - albeit a little smaller diameter than would be ideal - but the original motor was too fat to fit inside the body.

After a little research online Himself invested in a very wee 12v Tramfabriek coreless motor to replace it.

It fits snugly inside the bonnet with just the worm poking out into the cab area - much less obtrusive than the Farish motor would have been.

Himself is slightly short on projects so has been flirting with a danger and second-guessing Boston Lodge.

More specifically, he's been jumping a few steps ahead of the FR with the construction of James Spooner (II).

None of it is glued down - or soldered down, to be technically correct.

This mock up with the tanks and the half cab is only held in place with Blu Tack and fresh air - and the cab roof which has been sliced up is just a spare etch we had in a drawer.

I gather his main concern at the moment is finding the best way to remove the etched ribs.

Two Sides Of The Story

A little more work has been put in on the contract job for a model of Carnforth buffet car 114.

The window frame detail has been added in using the 10 thou strip technique I described in a previous post. 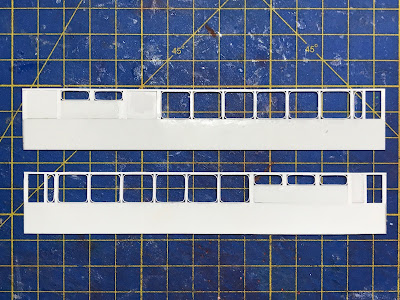 Once you get your eye in and establish a rhythm it's quite a relaxing and enjoyable job, and also very satisfying when you see the finished effect.

The most important thing is to try to use reasonably 'fresh' strip - if it's too old and brittle there is a risk it will snap at the corners when you apply a drop of solvent along the edges.

I think I might make the carriage ends - and fill the corner gaps on these sides with Milliput - before I go on to add beading detail.