A small amount of progress has been made on the tamper in the last week.

Both bogies now have their various appendages.

The disc brakes appear only on the 'engine' side of the machine.

On the 'clock' side the Caernarvon end bogie seems (as far as I can tell from photographs) only to have two extended axle stubs. This is the unpowered, trailing bogie on the model.

At the Porthmadog end there is a big plate which covers up most of the bogie frame and has four quite meaty electrical cables or pneumatic hoses (?) disappearing up into the engine compartment.

Here is what the results look like on the naked Kato chassis. 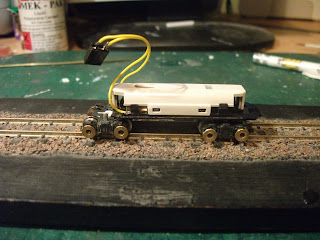 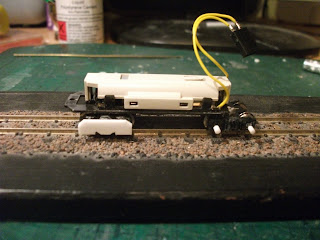 (The observant reader will notice that during the process I managed to detach the power wires from the soldered joints with the pick ups on the trailing bogie - whoops!)

The next job is to come up with something to represent the calipers on the disc brakes and those mystery cables / hoses on the powered bogie.
Posted by Rob Waller at 20:41 No comments:

The rolling stock is coming out of the paintshop thick and fast down south. 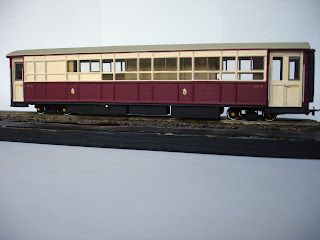 This is the WHR's 'service carr.' 2010. Some would say it's the most important carriage on the railway and I would contend it's the most sophisticated vehicle ever built for the UK narrow gauge.

A few years back the FR developed the concept of service carrs. which would carry no passengers but bring the guard, the catering and most importantly, the on-board lavatory into one vehicle.

On top of that 2010 is also a mobile power station. The central compartment contains a diesel generator which provides the power for fridges in the catering compartment and the lighting circuits for the rest of the formation. (Your average standard gauge preserved railway would be jealous of facilities like that!) 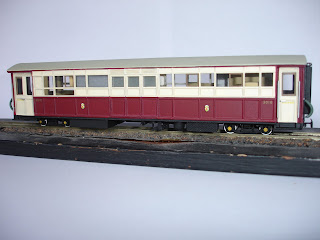 The FR has a similarly equipped service carr. 124, although it was built to the smaller FR 'Barn' profile.

2010 runs on ex-Romanian bogies which we are representing using Grafar N gauge Commonwealth bogies. We have turned ours out in ex-works condition complete with the white painted tyres.
Posted by Rob Waller at 21:45 2 comments:

Loaded Up And Ready To Go 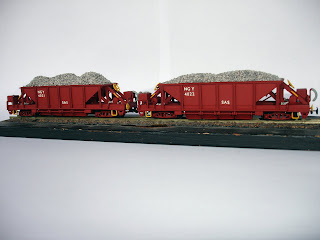 Both AY ballast wagons have now had attention from the airbrush and the transfer sheet.

We were oh so nearly caught out by the lettering on the wagons. Forgetting for a moment that this is the FR / WHR we were dealing with we just assumed that they'd be the same on both sides. Well you would, wouldn't you?

Just in the nick of time we discovered they have the letters SAR on one side but SAS on the other.

I was a little confused as to why until I realised, of course, that it's bi-lingual. One side in English the other in Afrikaans.

The false loads are certainly generous but not untypical of how they were often snapped while at work on the rebuilding project.

Nearly all our models are finished in ex-works condition and these will be the first of our models to get some serious weathering.

That's why there are little piles of loose ballast on the platforms at either end of the wagons, it seems some always spills during loading or falls off while on the move.
Posted by Rob Waller at 17:19 No comments:

One of the very distinctive features of the KMX tamper is the outboard brake discs on the bogies, which are considerably more prominent following its conversion from Metre Gauge to 2 foot. (Or 1 foot 11 and a half to be very correct about it). 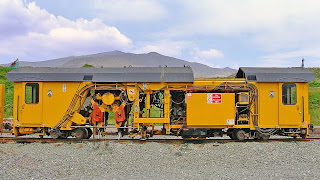 This is one of the challenges I chewed over during the two or so years before I actually began making the model and the solution I came up with was these brass top hat-type things. 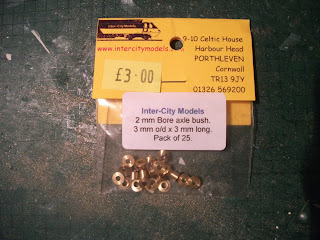 I figured could glue these onto axle boxes of the plastic Kato Shorty bogies and it might look something like those outboard brakes. Tonight I've been trying out the theory. 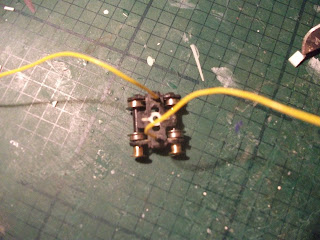 Of course, as with any prototype build, there were a few false starts and a wee bit of taking off, bodging and trying again until I got there.

On the first attempt the brass extensions were fouling the front bracket for the tie bar that runs in front of the tamping head.

I tried filing down the bracket as far as it could go but the bogie still only had a few degrees of turn.

Clearly the top-hat thingys would have to be made smaller, but how?

I considered reducing the diameter so they would swing below the obstruction. But that was going to be a little tricky without using a lathe and I thought they might end up looking too small.

So what I did was reduce the length of the shaft in my typically improvised way by placing the top hat upside down on my cutting mat, holding it in the jaws of my tweezers with one had and applying a grinding disc in the mini-drill with the other hand.

Not necessarily elegant but it was effective and that's all that matters, isn't it?

So here's a shot of the first bogie side in position on the model. 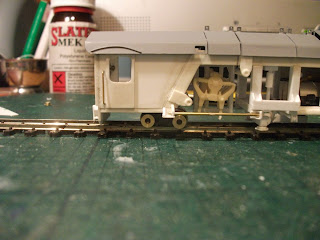 A rare treat for me today - the chance to work on one of my own models!

I've been adding more mechanical bits and bobs to the KMX tamper. 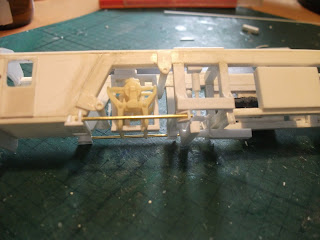 The most obvious new parts are the horizontal bracing pieces - the thick plastic beam and the tie bar in front of the tamping head. 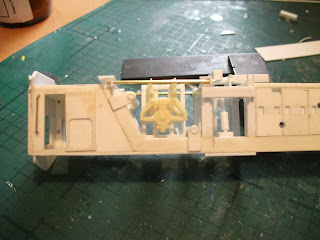 I've also completed a lot of the lining mechanism in the centre bay. Or at least something that looks vaguely like the mechanism. I'm aiming for a convincing impression rather than a faithful reproduction here.

The shaft that heads off to the right should continue much further along but because the motor slots in from underneath this is as far as it can go. 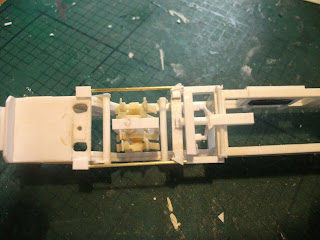 Last task for today was knocking up some guide wheels, made up using tiny slices of styrene tube. 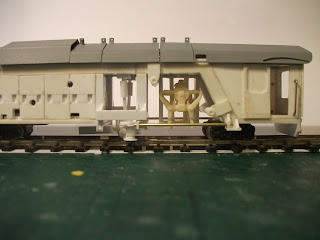 Here's the same section on the real thing. What do you all reckon? 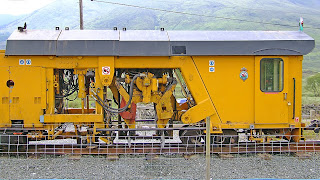 And finally some posed shots with the bogies and roof on, to check that the guide wheels won't foul the track. There's not much in it but I think it'll be OK. 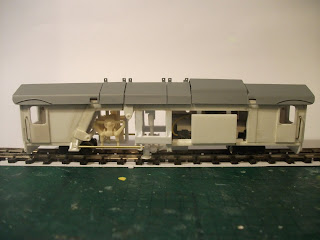 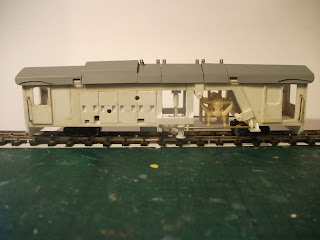 Another model fresh from the airbrush is the WHR's former SAR brake van. 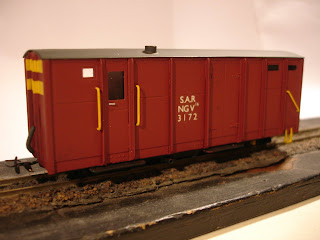 This has been built from a Worsley Works scratch-aid kit.

The real van (an NG.V-16 to give it its full title) was given to the WHR as a gift from the Sandstone Heritage Trust & Railway in South Africa in 2003 to celebrate the twinning of the two organisations.

It was rebuilt by volunteers at Dinas and was used on the WHR for the first time in 2006.

It's primary role has been as a tool van / brake vehicle on construction trains on the Phase 4 project to rebuild the line from Rhyd Ddu to Porthmadog.

The V-16 wagons included a primitive toilet. This was stripped out during the refurbishment and replaced with a cut down mobile chemical toilet, of the type see seen at music festivals and the like.

It has also been used in demonstration freight formations at the Superpower events, the most recent being held last month.

(The chemical bog has recently been removed)
Posted by Rob Waller at 21:49 No comments:

Now that Boston Lodge has finished building the replica L&B Manning Wardle tank 'Lyd' it's been judged safe to begin work on our 4mm version.

This is in accordance with Bron Hebog Golden Rule Number 1 - never assume Boston Lodge builds things according to the plans until you've seen it with your own eyes.

Lyd has been the star attraction on the FR / WHR for a couple of months now and has also appeared on L&B territory at Woody Bay.

So the seal has been broken on the Backwoods Miniatures kit and Himself has made the first folds. 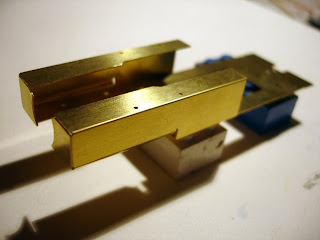 I'm going to be especially interested to see how this build progresses.

Another well known 009 modeller has written extensively of his concerns about the difficulty of assembling Backwoods Miniatures mechanisms and of their long term reliability. Indeed he has gone so far as too rebuild all his Manning Wardle tanks using the Grafar 08 shunter chassis.

We have to state that this is in complete contrast to our experiences with Pete's kits which continue to perform like Swiss watches after many years on the exhibition circuit on our layouts.

Perhaps it just depends on how well they're put together? They are indeed intricate, but are also superbly designed and seem to us to payback all the time, effort and patience put into their assembly.
Posted by Rob Waller at 21:29 2 comments: