Himself has begun making the alterations to the Farish 08 chassis which will power our model of No. 9 - the large, yellow, ex-Australian shunting diesel at Dinas. 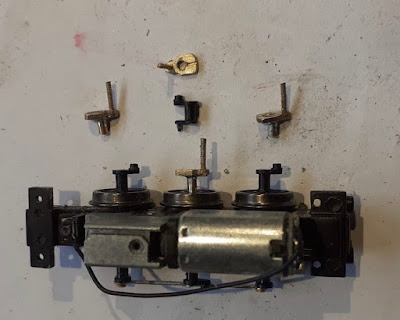 In the search for a more authentic look, with chunky fly cranks, he's replacing the plastic extensions which create the false outside frame effect on the 08 with a couple of packets of brass cranks we had in our strategic reserve of bits and pieces.
These were once produced by Meridian Models (item MP24) but so far as we can tell are not available at the moment - which is a shame because they're very handy to have.
They are fitted over the stubs of the overlong axles on the wheel sets on the chassis. 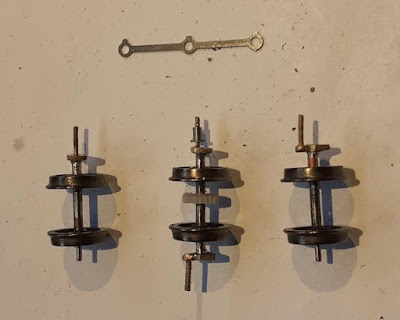 Quartering is as simple as it can ever be because you can line up the crank with the inset in the wheel where the original plastic cranks were positioned.
The jackshaft drive will be created using the clever replacement chassis keeper plate supplied by RT Models and employing a fourth set of these cranks.

Adventures In The Spare Room

Many months ago I mentioned the idea of a home test track and at last it is coming to fruition.

The pretext is to provide something semi-permanent for the youngest generation to mess around with the antique collection of OO models, which have been faithfully hoarded by Himself since the family moved house and switched to narrow gauge modelling over three decades ago.

The location is my spare room / study, which occupies a rather narrow extension on the side of the house and is only five and a half foot wide. 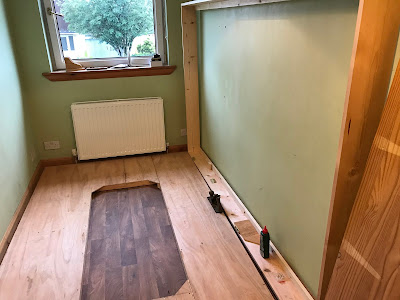 We're also designing it to fold away into a storage frame, because I doubt I could have got 'planning permission' for something which took up half the room on a full-time basis.

Over the course of a couple of days Himself and I have knocked together an 8 x 5 baseboard using a sheet of thick ply - with some cunning slicing and dicing -and a bundle of 2 x 1 lengths.

We've yet to tackle the really difficult bit which is getting it hung on the wall!

I wouldn't normally recommend a flat baseboard ,but it is only intended as a glorified train set, rather than a layout.

Having put in all this effort, of course, I'm demanding something back and have negotiated running powers for an element of narrow gauge to be included on the track plan.

Officially this is purely for the purposes of testing rolling stock under construction at the other end of the room.

However, I would be lying if I denied I'm not a little bit excited at the prospect of having a layout of some kind in the house for the first time since I was a teenager....

Hooping For The Best

For what appears to be such a basic and insubstantial carriage it's remarkable how much fiddly work is involved in scratch building a model of FR 'toast rack' carr 39. 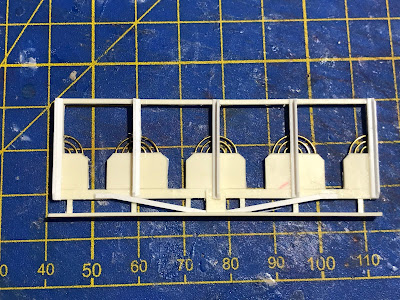 Last night's task was to begin bending and fitting the distinctive hoops at the side of these Hudson carriages.

This involves forming sets of U shapes of three radii out of 0.45 brass wire and carefully fixing them in position.

One down, one to go.

And just like that, a few days later, a new carriage takes to the rails.

Himself spent the week putting the finishing touches to the Pickering brake replica which looks quite the part posed at the platform at Beddgelert station.

When the body side is brass, as this one is, it makes painting the drop lights neatly especially challenging.

I'm also very pleased with how the resin cast lamp pots on the roof look now they're been picked out in black with the base ring matching the off-white roof.

What really sets it off, of course, is the W H Rly lettering.

This has been done by transfers, rather than the slightly raised metal letters on the real carriage, but at this scale I think it hardly matters.

I look forward to seeing it as part of a WHHR rake running behind Russell, and hopefully it won't be too long before that scene happens in real life.

With the construction phase done Himself is putting the Pickering brake carriage through the paint shop. 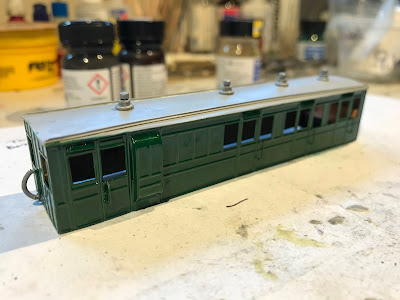 After being sprayed with primer it has now been treated to four coats of gloss green before the tricky task of picking out the window droplights in a woody brown.

I'm still quite satisfied with how the third generation lamp pots look.

Hopefully that won't change when they're painted black against the light grey roof.

I suppose in a way my naivety is quite touching, but I really shouldn't have been surprised when my plan to make one master for the sides of the FR and WHHR Hudson toast rack carriages hit a snag.

A correspondent informed me that there is a clear difference in the pair in the orientation of the upright L girders on the sides.

While the WHHR rebuild has them as per the original carriages the FR replica - built by Winson Engineering in the 1990s - has most of them facing in the opposite direction.

I am also informed that this is not what was designed, however, that is what was delivered!

Armed with this unfortunate information my options were:

a) build separate masters for the two carriages

b) try to slice off the uprights to make a generic master to which I could use to cast incomplete sides and add the uprights separately for each carriage.

I've decided to go for the second option. 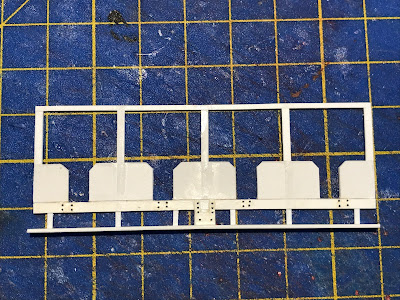 This now looks a lot more basic, although I have been able to add on the footboard and some resin rivet head transfers along the frame.
Hopefully cutting and sticking on the girders will be much less hassle than having to make a whole second side from scratch.

A while ago Himself was given a gift of a Nine Lines Lynton and Barnstaple bogie brake van.

Obviously enough this is not our prototype, so the question was what to do with it?

While dropping in at his place at the weekend he showed me the result of some tinkering to convert this into a track cleaning wagon - which is a very handy thing on a layout as large as Bron Hebog with sections which are beyond the reach of a human arm. 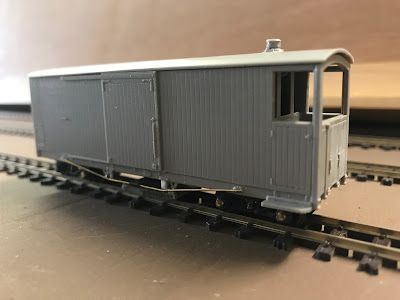 The business end of the wagon is this pad slung beneath the chassis, covered in thin cloth, which rubs along the rail tops as it is pushed / pulled around the layout. 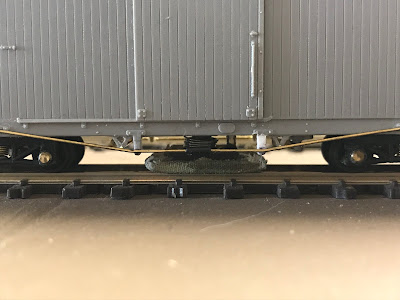 On any mobile track cleaning device you need some way of keeping this in contact with the rail, which in this case is done with a spring pushing it downwards from the bottom of the wagon. 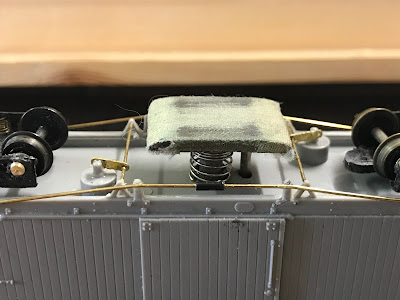 The spring he used here is a relic of his former career as a piano tuner, and is part of the mechanisms he used to fettle as a side hustle. 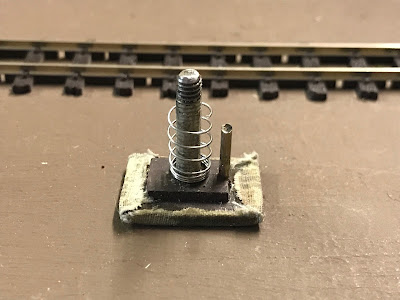 The critical thing is to make sure the spring is not too strong to push the wagon off the rails, and for this reason the inside of the van is heavily weighed down with lead. 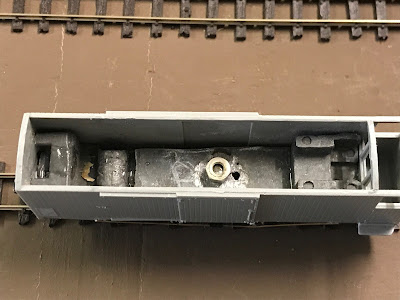 So heavy, in fact, that it needs two engines to top and tail the wagon to get it up our hill!

It's been an ambition for a while to get a second model of Hudson 'toast rack' carriage 39 in the fleet, wearing its Col. Stephens green to match many of the other vintage carriages. 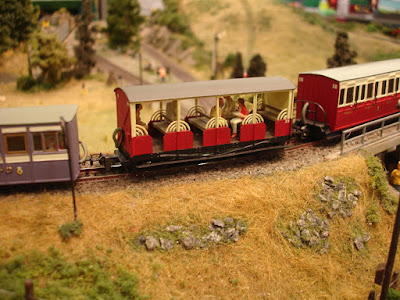 Our existing model is one I scratch built in styrene probably the best part of 25 years ago in its original red and ivory colour scheme.

As well as the FR one we could do with a third model to represent carriage 42 on the Welsh Highland Heritage Railway.

So when I heard the 009 Society had produced a run of their exclusive, members-only, kits for the first time in many years I thought that would be the ideal opportunity to get these models built.

Alas, it appears they have sold like hot cakes - or more like hot toast? - and by the time Himself obtained a login for the members' section of the shop they'd all gone!

So rather than wait for an announcement about if or when there might be another production run, I've decided the best thing to do is to make a pair myself.

I've done it before so it won't be difficult.

I'm going to make up masters for the sides and ends and cast copies in resin.

A friend, who got in ahead of us and bought a handful of the Society kits, kindly helped me out with a few measurements and after a couple of hours work last night I've got this far. 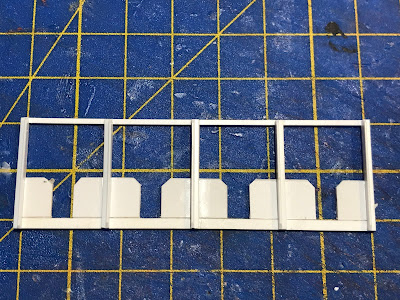 Just like the Society kit the semi-circle hoops which are such a feature of these carriages will be added on by hand, and I've still got the footboard and the triangular underframe to add - plus bolt heads / rivets - before it is ready to make a mould from.

The ends will be slightly more involved as the FR and WHHR examples are different - or at least they were in the period I'm going to model them - 39 had many more horizontal slats before it was taken in for a heavy overhaul ahead of the 2021 season.

Or perhaps more a case or persistence pays off.

I think we're both satisfied with the result of version 3 of the lamp pots for the Pickering brake replica. 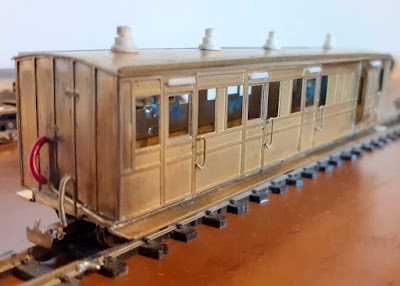 They are without a doubt the biggest pain in the backside I've had on the modelling bench for quite a while but I think the result of many weeks tinkering will be worth it.

You'll also notice Himself has added the air and vacuum pipes, this being a dual braked carriage, and a very pragmatic decision by the WHHR which is to be applauded. 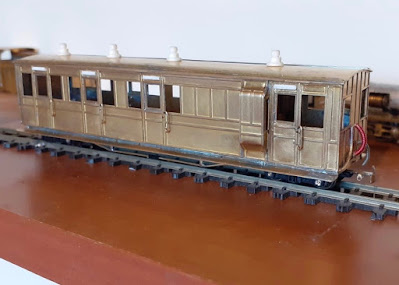 The long, sweeping rain strips have also been soldered onto the roof.

It's details like these, and the styrene ventilation hoods above the doors, which really make the difference on these Worsley scratch-aid bodies.

Today's update is to show you where I've got to with the interior for the Pickering brake. 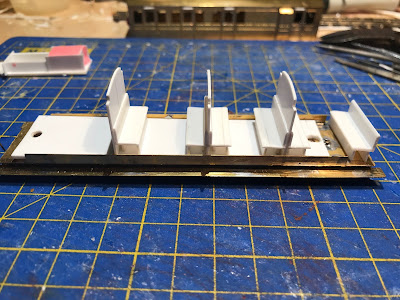 As carriages go this is a very simple one with only three compartments and basic bench seats.

The real ones - as you may know - are made up of horizonal slats, but I'm not motivated enough to try to recreate that when you won't have a hope of seeing them inside.

Same goes for the vertical boards on the compartment walls - I'll be quite content with plain panels as long as they're the correct shade.

What I am going to be fussy about is getting the lamp pots to look right, and in the background of the picture you'll see a tiny styrene box filled with RTV rubber.

Under there is my third prototype!

Having seen the pictures of the carriage being delivered to Gelert's Farm it's obvious that I need more of a stacking rings effect, so this latest effort uses a smaller diameter tube for the very top section.

Once the rubber is cured I can cast a few and see whether I've cracked it at last?