I was determined that this week was going to be more productive than the last and that some actual modelling would get done at my end of the operation. 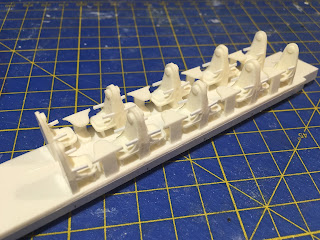 An hour of free time the other night allowed me to begin sticking the seats in place for 152 on the chassis unit.

These have to be lined up precisely with the window pillars, which are only around 1.5mm wide, which is where the 60 second superglue I'm using really comes into its own for bonding resin to styrene.

There are a couple of bulkheads to shape and fit before I carry on with fixing down the seats and tables in the observation end.

As with all my carriages these are not just decorative but are placed strategically so they will hold the glazing snugly in place.

The colour curse has struck again!

We really should learn to do our research properly first...

Himself has been getting on with painting bowsider 17, inside and out. 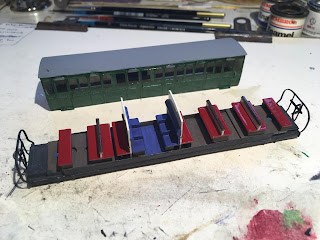 The outside has had a first wash of green.

(Don't worry, the ivory panels will be filled in later on.)

No, the problem is with the interior.

Himself asked me what colour the seat squabs in the first class compartment were?

Blue, I replied with absolute certainty, because that's the way it works on the FR, right?

Except that over the weekend he came across a picture he'd taken, lost deep somewhere within the thousands of pictures on the laptop, which show that it's neither of those - it's actually green.

Because it turns out the restoration to 1950's 'Garraway' condition includes putting back the same style of green cloth that came with the ex-Mersey Rail seats which were installed when the carriage was first put back into service in the revival years.

Fortunately it's not too late for us to fix that.

Imaginary modelling is much easier than doing it for real - some might also say it can be more fun?

Anyway, in the absence of actually making any progress with anything this week I've been turning my mind to how I'm going to create the interior for the Gladstone Carriage. 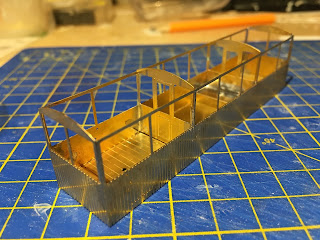 The posh saloon bit in the middle is easy enough - that just has two upholstered longitudinal benches along either side.

The tricky things with be the seats in the open section at either end.

They're done in a traditional wooden bench style with slats, very similar to the ones fitted to the Winson semi-opens built in the mid-90s, and just like those they have the disadvantage of very highly visible, so cheating is not really an option.

When I modelled these I made them from scratch, gluing on every slat made with a styrene strip.

What I have to decide is whether I can face doing this again or whether there is a better alternative?

I'm toying with the idea of whether it's possible to etch in brass some kind of ladder-style thing which could be bent and glued in place onto a base - maybe resin cast?

Or would that all be just as much of a faff as just doing it from scratch?
Posted by Rob Waller at 09:00 3 comments:

Himself has got bowsider 17 almost ready to be painted. 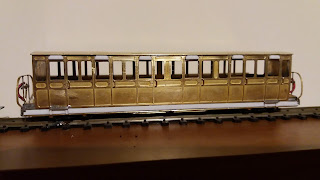 It’s had the ventilator hoods above the doors added in styrene and the grab handles fitted.

The other major addition is to fill in the the solebar with a long piece of styrene to properly represent 17 in its current state.

He’s not planning to add a couple of resin transfer bolt heads to really finish it off before he gets the primer out.
Posted by Rob Waller at 09:00 No comments:

Now I've got 152 back from Himself it's time for me to fit the interior I made many months ago. 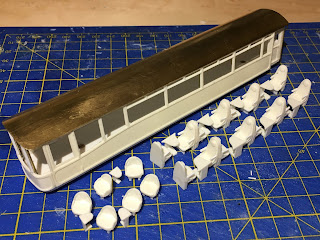 Fortunately, although there are some obvious changes to the exterior of the carriage compared to 150, the same seat design has been used so I was able to run off another batch of resin castings to the same design.

These then have fiddly details, like arm rests and legs, added in styrene.

The high back chairs are cast individually and then glued together to make pairs for the middle six units.

There are a couple of internal partitions to be added in styrene but it's mostly a case of just glueing everything into position.

The underframe will be more involved with the vacuum cylinders, which are unusually fixed at an angle, to be formed out of styrene and lots of very curly pipework to be represented in brass.

I may have to ask for the other one back to remind myself how I did it.
Posted by Rob Waller at 09:00 No comments:

The lining on 143 is complete. 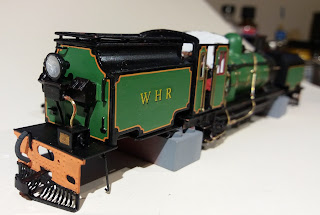 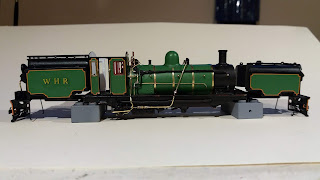 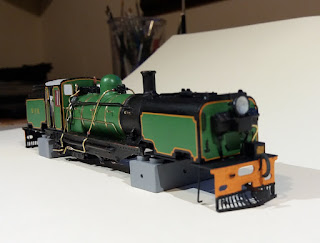 Himself has had another busy week.

As well as lining out 143 (more on that to come soon..) he's putting the finishing touches to superbarn 120 with the application of the crests and the word Third on the doors. 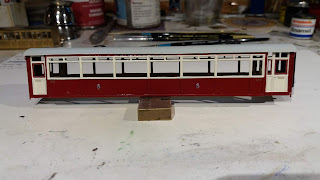 I never cease to be impressed with how good the crests produced by Precision Decals are.

All it needs to be finished is a coat of varnish, but that will have to wait until the weather warms up a bit because spray painting inside the main part of the house is frowned upon.

Making up an interior for bowsider 17 has been satisfyingly swift and straightforward. 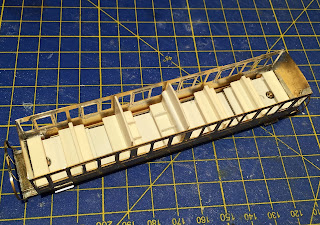 It's helped by this carriage only having the one first class compartment and for the third class sections either side not being separated from each other as some of the other carriages have.

As you may be able to see in the picture above, it has been made in three sections to account for the raised platform above the bodies at either end.

I can hand this one back to Himself for the roof to be soldered on and it can join the queue for painting in its current 'Garraway' green and ivory livery.

Himself has a neat little trick for getting straight edges to the panels when he paints locomotives - transfers. 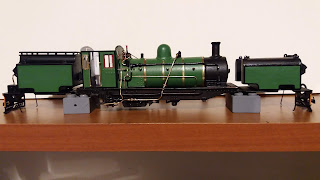 He uses thick black lining from the Fox waterslide range.

You can see how effective it looks on 143 here which has had all its coats of green and is now ready to move onto the lining out.

Yet another carriage has appeared.

Himself has now fixed the roof and front pillars onto 152 and it’s been handed over to me for the interior. 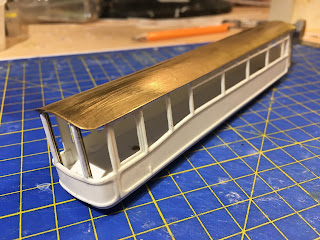 All the seats are already cast but I shall finish the job on bowsider 17 first before I get onto this one.

I don’t think Himself will mind because i’m Sure he’s in no hurry to do the painting and lining on this one knowing how tricky 150 was.
Posted by Rob Waller at 09:00 No comments:

Projects are piling up on my desk now.

I already have the Gladstone Car to make an interior for and now Himself has handed over the body of the new bowsider 17 to fill. 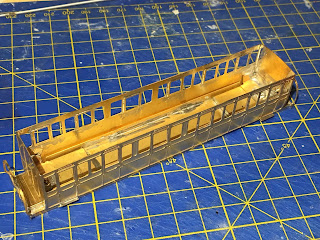 This needs to be made in at least three parts on account of the stepped floor at each end above the bogies.

Unlike some of the other carriages of this type, 17 only has the two interior divisions on either side of its single first class compartment - the third class ones either side are open, at least in the sense that there are no walls.

Being mostly bench seats it shouldn’t take too long to make.
Posted by Rob Waller at 09:00 No comments:

Himself has soldered together yet another new carriage - this one is going to be our second version of bowsider 17. 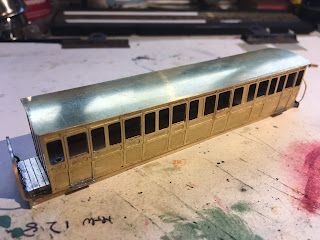 The first was made around 30 years ago from a Langley etched brass kit and was finished - inaccurately - in the simple two tone 'Mountain Prince' livery.

(Inaccurate in that at this period the carriage had most of its distinctive panelling removed in favour of flush plywood sides, but the Langley kit has all that detail on.)

This version is from a Wosley Works scratch aid kit and will show the carriage running as it does currently in the green and ivory 'Garraway' livery and will go very nicely with our 11 and 12 pairing.

It's not been completely straightforward, though, because we discovered that the ends which come with the kit have too many vertical strips to show the carriage as it currently is.

As luck would have it we've been able to arrange a transplant from the body which was supposed to be turned into carriage 20. 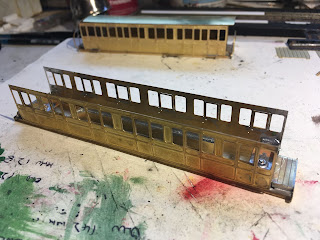 So what's happened to carriage 20?

Well, it turned out that there's bit a of a cock up.

Since the last time Himself assembled a model of the 19/20 kind of bowsider it turns out the Worsley etches have been redrawn, with the result that when he put it together he discovered the frame was much longer than 19, by a couple of scale feet.

While we wait for a replacement set of etches - with the previous proportions - at least we can made some use of part of the otherwise redundant body.

Himself has cracked and done what he said he'd never do - try mixing his own shade of green for 143. 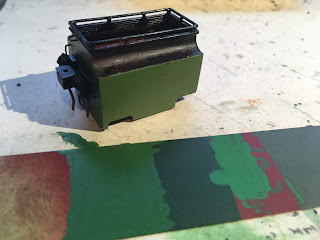 The latest effort is the one on the far left of this piece of brass which is doubling as a swatch card, placed beside the rear bunker which has had two coats of what we now agree is something that's too light.

His reticence about mixing is the uncertainty that you'll be able to perfectly replicate the shade if, for example, it turns out that you've not mixed quite enough.

He's happy enough, though, if it can be a 50/50 mix - which is what we do with our FR carriage red - and what he's come up with here is a blend of Railmatch 'Multiple Unit Green' and Humbrol 'Mid Green'.

The colour of this engine has been driving us gently demented over the last week or so.

It is such a difficult shade because on the real engine it looks very different depending on the lighting conditions, whether that's in a photograph or when you're standing in front of it, and that's before we consider the unfortunate fact that the paint on different bits of the locomotive have visibly weathered.

Going Round In Circles

This is one of the most useful items of modelling equipment I ever bought - a compass cutter.

If you’ve never come across one before it’s absolutely brilliant at helping to form the end pieces of carriages. 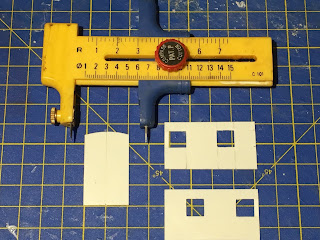 The roofline of Van 51 has a very shallow radius and on the end with the three windows I will cut off the top piece, with the curve and fix it onto the top of the window pillars to form the end.

I’ve now made the two sides and will soon begin to add panel detail on top.
Posted by Rob Waller at 09:00 1 comment: