I've quite often found myself in the situation where you end up saying: "If you can't beat them, join them."

Within my family I'm often reminded that I was the person who was quite determined never to get a mobile phone, and now - like most of us - it has to be almost surgically removed from my grasp.

So it is with DCC power and locomotive sound. 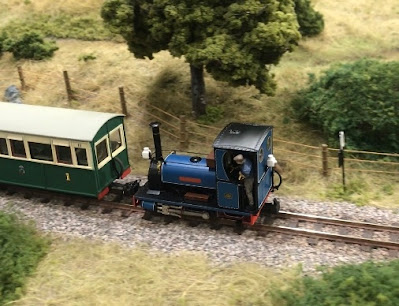 The trigger has been the arrival of 4mm RTR narrow gauge locomotives in recent years.

Himself was first to crack, chipping our Bachmann Baldwin, just to see what it's like.

Then, when the Double Fairlies were released last year, he plumped for one of the sound-fitted versions of Earl of Merioneth, and a DCC controller beneath the Christmas Tree.

A few days ago I was unable to resist placing an order for a be-chipped 'Garrarway-era' Linda.

Himself's techno enthusiasm has been encouraged by fellow modellers at the Greenock club who operate many of their 00 layouts with button-pushing handsets and a cacophony of chuffs, whistles, horns and throbbing.

So it was with much excitement at Manchester that we were able to have a play with a remarkable sound-fitted Bachmann Britomart, which had been adapted by an old friend of ours, John Gay from Digitrains.

As you can hear from the video the effect is really quite remarkable - even running on DC-only - especially considering it was something the manufacturer decided not to attempt.

To achieve it John has placed a speaker in the cab, disguised by model crew who've each had to have one of their legs amputated, and a 'stay alive' capacitor has been hidden in the cab roof.

That really is something to put on the wish list.