This week he has been working on a couple of the stack of B wagon kits I sent him to build up into models of the new arrivals on the WHR from South Africa.

He's finished two of them plus added some extra details to the model of B934 I built for him, which was one of the first tranche of wagons imported to Wales and is being shown during its spell as a bike wagon running in passenger trains.

It's the one at the front in this picture. 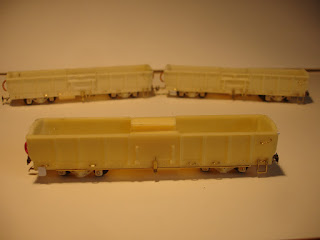 The other pair are B922 (left) and B1680 (right)
They have required some modifications because our research showed that at some point they acquired new vacuum tanks which were put back in a different place to most other B wagons.
He has had to slice off the tanks  which are part of the one piece chassis casting on the kit and replace them with new ones I knocked up for him. 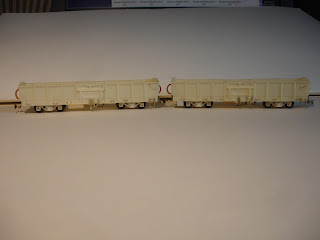 They are more or less ready for painting, but that can't happen until the extension work is complete - spraying inside the house is against the domestic bye laws!﻿
Posted by Rob Waller at 09:04