I'm intending to make a Mallet.

My apologies to those who don't immediately get the pun. I appreciate these locomotives should properly be pronounced mal-ay, in a poncy French accent, but I'm a journalist and I can't help it!

The loco in question is this one. 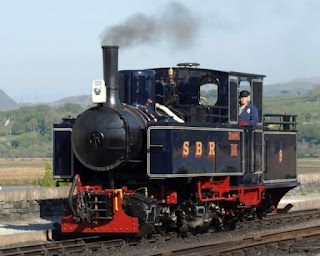 I call it the Jung Number 9, as do many others, because we can't get our tongues nor our fingers around the full name of the machine which was built for service a the sugar mill railway in Indonesia and which now resides on the Statfold Barn Railway in the English Midlands.

It visited the WHR in 2012 where it took part in the 'King of the Hill' contest, which was embarrassing won by the elderly Ladies of Penrhyn, Linda and Blanche - the four-coupled sisters putting various articulated competitors firmly in their place in the timed runs to the summit of the line.

My plan is to use an N gauge Minitrix Mallet as the basis of this project, and so I recently paid a small fortune on a popular Germanic auction website for this example. 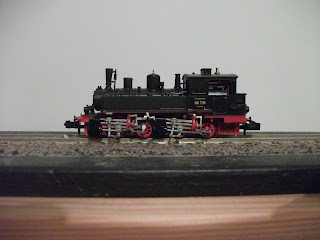 (Fortunately I managed to secure it before the UK lost its AAA credit rating and Sterling plunged against the Euro!)

I'm sure there will be pedants out there who will delight in pointing out that this chassis isn't a perfect match because the Jung Mallet has inside frames on the front, articulated bogie, but outside frames on the rear - fixed - half, whereas the Minitrix doesn't.

This is perfectly true, but - unless Himself volunteers to attempt to deconstruct the rather small mechanism and try to fit extended axles and cranks - I'm sure I'll be able to live with it.

It is, after all, only supposed to be a 'nice to have' novelty loco as opposed to a core member of the Bron Hebog fleet.

A more important consideration is that I have not come across anyone who says they have seen drawings of this machine. Apparently there was a fire at the makers which destroyed many records. So it seems that our only option is to measure the loco ourselves.

I am very grateful that the bosses at the SBR have readily agreed to allow us access to the locomotive and hopefully I'll be sending Himself along there with a tape measure and a notepad in the not too distant future.