There's been more work done on establishing the profiles for the scenery and the trackbed on the new board towards the back of the layout that I featured here a couple of days ago.

It includes what, I think, will be one of the most impressive bits of Bron Hebog as the line passes through the depths of Cutting Mawr right at the back of the layout. 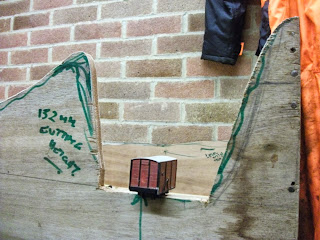 I've placed an old wagon where the trackbed will run to give some perspective and demonstrate just how high, and steep the sides of the cutting are here.

The wagon, incidentally, is an ancient attempt at kit-bashing a freelance four-wheeler into something that looks like one of the FR's old covered vans. It's not as tall as the modern WHR stock but it does at least give you some idea of what it might eventually look like when this section is finished.

(You can see a shot of the real location taken from the footplate of an NGG16 in a recent post titled Cab Ride.)

Cutting Mawr is at one end of the 180 degree bend behind Beddgelert station, most of which is on a prominent embankment.

Below is the profile which as now been cut at the other end. 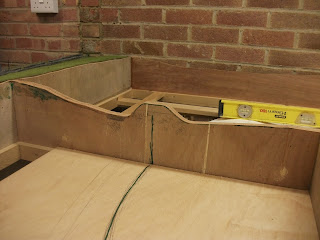 I hope to have more pictures of this section to post later this week.
Posted by Rob Waller at 10:00