Himself likes to keep things traditional and simple in the Grandad Cave which is why he's adopted a typically low-tech solution to planning the trackbed on the next two boards which will take the line around the second 180 degree bend and through Cutting Mawr at the very back of the layout.

It's a very three dimensional process because not only does he have to plan out where to lay the tracks but also work out the gradient and the topography of the surrounding scenery.

Here in this picture you can see how he's drawn the profile on a sheet of wood at the end of one of the boards and the clear outline of the embankment the trackbed sits on. 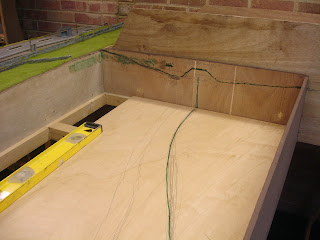 To the left of the picture you can see the existing part of the layout with Beddgelert station on it and how much higher this new section of track will be.

I do not know if it is a prototypical ascent - I most certainly don't have the mathematical skills to make that sort of scale calculation - but I think it will look impressive enough to someone watching the layout in action and that's all that really matters to us.

For this next picture the camera has been moved around to the front of the layout - where the punters usually stand - and here we've got a large piece of paper used to sketch out the big bend. 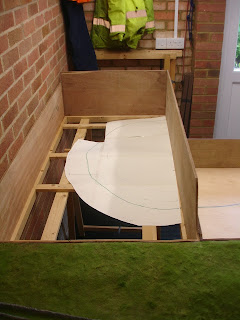 One of the decisions we will have to make here is how faithfully to replicate the degree of tree cover?

The real railway is lined on both sides of the curve today, but of course this bend was famously open and exposed in the early days of the WHR.  (I was going to write heyday for a moment, but then I realised that would be contradiction in terms! Today is arguably the WHR's heyday.)

The thing is though, the mind plays tricks, and I suspect a lot of us still believe there is not so much tree cover as there really is at this spot.

If we were to model the foliage faithfully I wonder if a lot of people would think we've got it wrong? Also there is the another consideration which is that this bend is going to be one of the best places to view the full length of a train on the layout. Would it not be a shame to hide it almost completely behind the trees?

As ever we will be guided by the Artistic Director. Much as we hate to admit it, he's usually right on these matters.
Posted by Rob Waller at 09:02