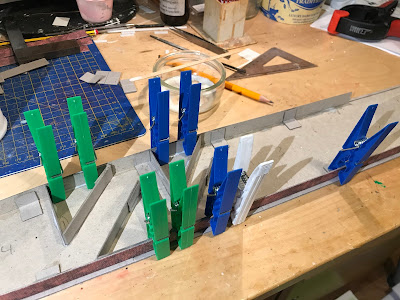 Last night I found myself raiding the washing line to use the pegs to hold together parts of the cardboard Metcalfe Models platform kit I was making up for my son's 00 side of the 'test track'.

It wasn't just the pegs.

I later stole the brass weights from the olde worlde scales in the kitchen to help keep the strengthening pieces in position while the glue dried.

These weights are regularly employed when I am resin casting to keep the clear plastic in place on top of the open mould and give the casting a nice, smooth back.

There isn't any more narrow gauge news to pass on this weekend.

Himself became separated from his magnifying visor during the week, which he left at my house after another wiring session on the test track, so small scale fiddly work was out of the question until I was able to return it to him.