The appearance last week of images of decorated samples of the Peco / Kato FR England models has been greeted with almost universal acclaim in the online 009 community, so I suspect I am not going to make myself very popular by giving a more nuanced appraisal of what we've been shown. 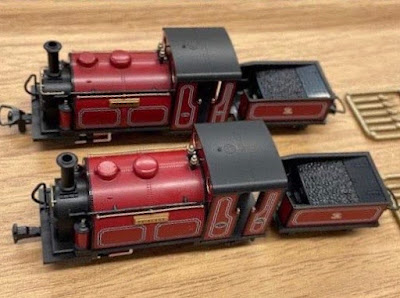 Like everyone I am overjoyed to see the appearance of a ready-to-run model of my all-time favourite narrow gauge engines, and I have no doubt at all that these will be a terrific commercial success.

They look to be night and day by comparison to anything that has been possible with the many kits produced over the decades, and for that the designers and manufacturers are to be congratulated.

As far as can be seen from these images the finish looks to be superb, and there's no doubt they have captured the look and feel of these iconic FR locos, and I am very pleased indeed to see the very distinctive Small England wheels have been replicated, and the motion - although apparently not to the fish belly profile - looks suitably slender.

The lining looks crisp and the rivet detailing delightful. 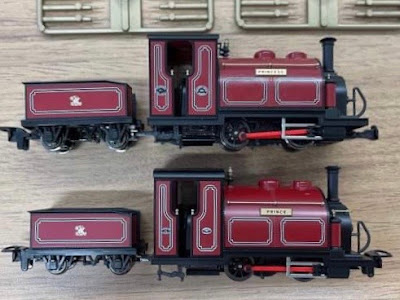 Do you sense I'm building up to a but?

You're right, and more than one.

Judging from these pictures I'm left with a nagging feeling of frustration of what might have been if the makers had gone the whole way and striven to make the most accurate representations of the individual locomotives rather than compromise on a generic tooling.

Let's face it, if there's just one thing readers of this blog must have realised by now it is that identical' is not a word in the FR lexicon!

To begin with let's look at the most obvious example on this pair: the nameplate on Prince.

It's the same length as the one on Princess.

Anyone who has cast even the most cursory glance at the real locomotives, or any photos of them, surely cannot miss that the plate (and mounting block) on Prince is so obviously shorter.

I'm sorry if this seems harsh, but when they've gone to the effort of fitting different smokebox handrails on the two models to not find a way to alter the nameplates is a poor show.

The slidebars and the mounting bracket also look a little toy-like from this distance - a bit too much like what we've got on the ancient Ibertren chassis under our existing Langley white metal kits.

Other reviewers have picked up on the whistles and the lining around the rear of the cab.

These may seem like trivial complaints, especially in the context of the decades we have waited for manufacturers to discover 009, but the reality is that now that they have these compromises on models such as these are not where the rest of the market is.

(They'll still fly off the shelves, though...)

When this project was announced there was great anticipation of the Kato chassis, but I see now this model will be fitted with a traction tyre - is this the 1980s? - and I have seen conflicting reports about whether or not it will be DCC ready or even DCC compatible?

Let's not pretend that it's because the model is too small.  Bachmann have found a way to make room for decoders in their Quarry Hunslets which are tiny compared to the capacious saddle tanks on an England.

That won't affect whether or not we'll buy some - we surely will - because our layouts are DC, but some of the translated literature suggests the prototypes have hauled 3 (!) Peco carriages on level track, even with their rubber tyres.

That's a little worrying if, like us, you have a layout with gradients. Hopefully something was lost in translation there.

Ultimately, I know what is at the route of my comparative disappointment at this model.

It was an open secret that another manufacturer was intending to make 4mm models of these locomotives - indeed, had gone so far as to measure them up - and it would appear that these models were announced as a spoiler.

Well, I guess all's fair in love, war and business, but I believe what we have ended up with, in this very pretty, slightly generic England, is a far cry from what we were likely to get (eventually) if the other firm had been left to it.

And that's a shame.