This week Himself's been doing a bit more work on version 2 of Vale of Ffestiniog. 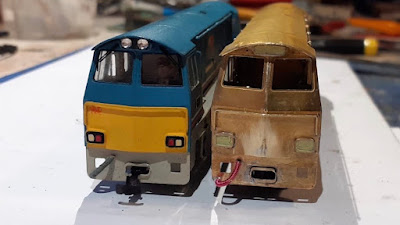 Most of it is stuff you don't immediately see, such as making sure the body is sitting level and square on the Farish diesel chassis, and matching it up against its clone to make sure the ride height is set correctly.

In this front view you get a good look at some of the extra details Himself adds to these Worsley Works body kits.

The most obvious is the light clusters down near the buffer beam abd in the centre above the cab windows.

He's also fashioned the lip around the hole for the coupling shaft as well as the handrails, vac pipe and - new on this version - the lamp bracket in the centre between the lights.

Unfortunately - I think - this version won't have the lovely big twin headlamps because in the form he's chosen, it now has a rather less impressive set of square LED lights, much the same as those on the recently restored Garratt 130.

At my end I have cast the large fake bogie side frames and I'll hand those onto him the next time I'm passing.